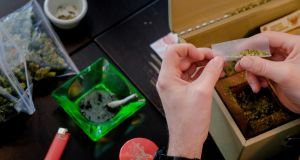 DC law permits adults over the age of 21 to posses up to two ounces, 56 grams, of marijuana. Photograph: TJ Kirkpatrick/The New York Times

Reflecting a sea change in social attitudes towards marijuana use that has led to the drug being legalised in Washington state, Alaska and Colorado, the US capital became the latest area of America to make “weed” lawful for recreational purposes. Voters in Oregon have also approved legalisation to make dope-smoking lawful but it doesn’t come into effect until July.

About a fifth of the district is on federal land, so smokers will have to be careful not to wander down to Washington’s famous monuments on the government-owned land with a joint in hand.

DC law permits adults over the age of 21 to posses up to two ounces, 56 grams, of marijuana and to grow six plants at home, though only three mature plants are permitted. They are not allowed to sell marijuana but transfers of up to one ounce are permitted.

The rules, passed by 70 per cent voters on a ballot of “Initiative 71” in November, permit bongs, pipes and other marijuana-related paraphernalia but smokers cannot light up in public.

The District of Columbia is not a state but a federal district, so local representatives must seek congressional approval for legislation. The Republican-led Congress passed a budget legislation that in effect removed funding to create a regulatory system that would allow the district operate an effective system behind marijuana legalisation.

“We say move forward at your own peril,” Congressman Jason Chaffetz, chairman of the House Oversight Committee, warned DC officials against the legalisation.

Mr Chaffetz and another Republican congressman warned city officials in a letter that enacting the laws would be in “knowing and wilful violation of the law”.

The Utah Republican warned Ms Bowser personally, telling The Washington Post that she could “go to prison for his”. The DC mayor has won plaudits from constituents for standing up to Mr Chaffetz’s threats and proceeding with legalisation.