Both have close ties to Ireland, but senator and governor differ on immigration dispute 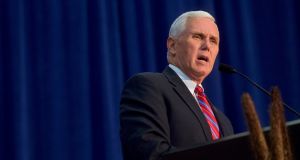 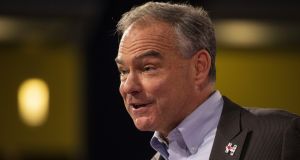 Senator Tim Kaine, Hillary Clinton’s running mate, is ferociously proud of his Irish roots. He likes to say that he is 100 per cent Irish with a little tint of Scottish. Photograph: Ruth Fremson/The New York Times

One Capitol Hill staffer recalls a question asked at a table quiz in Washington a few years ago: who is the only member of Congress to have cut turf in Ireland?

The answer is Mike Pence, then a congressman from Indiana and now the midwestern state’s governor and running mate to Republican presidential nominee Donald Trump.

The two represent the Irish parts of their tickets; both have strong ties to Ireland and have regularly visited. But they have distinctly different positions on immigration.

“He is ferociously proud of his Irish roots. He likes to say that he is 100 per cent Irish with a little tint of Scottish,” says Kaine’s friend, Pádraig Fleming, from Courtmacsherry in west Cork. Fleming was a guest of Kaine’s at the Democratic convention in July.

Fleming first met Kaine’s parents, Al and Kathleen, about 25 ago when they visited Ireland. He came to know their son, a lawyer, while he was lieutenant governor of Virginia from 2002-2006.

“He is the most optimistic, pragmatic man you will ever meet,” Fleming says of his friend. The Cork man says Kaine has the optimistic strength of character of his mother and the pragmatism of his father. The latter ran a small iron-working shop in the Kansas City suburb where Kaine grew up.

Kaine’s four grandparents were born to Irish immigrants (one great-grandfather was born in Scotland). He has spoken emotionally of a 2006 trip to Ireland with his wife and three children, and how they found the ruins of the Longford home where his great-grandfather, PJ Farrell, was born.

“Dad, why does everyone look like us?” his 11-year-old daughter asked him.

Fleming says that Kaine likes to hike on his holidays in west Cork, sing songs of the American south and listen to Irish ballads in the Anchor Bar in Courtmacsherry.

Kaine presented the trophy at the annual Courtmacsherry Strand Races in 2011 when, Fleming recalls, he compared the races favourably to the Kentucky Derby in his presentation speech.

Kaine, who worked as a missionary in Honduras, often breaks into Spanish at rallies while promising laws to grant citizenship to more than 11 million illegal immigrants, mostly Hispanics.

Pence pulled pints behind the bar in the family pub, Morrissey’s in Doonbeg and cut turf on the family farm as a younger man on a visit.

Pence’s cousin, Hugh McNally (35), who now runs Morrissey’s, recalls the unassuming Indiana man and his family chatting with his Irish relatives in the pub during a 2013 visit, when Pence stayed at what is now Trump’s golf resort.

Pence’s ancestral business benefits from the passing trade from tourists visiting Trump’s resort, says McNally. The village has “a buzz” with the connections to potential US president and vice-president.

“There is bit of notoriety around Trump, but we see the good in it. We tend to ignore the notoriety part,” said McNally, excited about the prospect of Air Force One landing in Shannon.

Pence, however, cannot ignore that notoriety. The even- keeled conservative will have to defend his running mate and his more inflammatory statements as Kaine continues to prosecute the Clinton case in what should be a more conventional debate than the Clinton- Trump face-off las t week.

Tonight the Republican will likely face hard questions from his Democratic rival about the contrasting positions on immigration between the candidates at the top of the tickets.

As the third-ranking Republican in the House of Representatives in 2009, Pence incurred the ire of the hard-right Tea Party because he was willing to cut a deal on immigration reform.

“April 11th, 1923” was Pence’s explanation: the date his grandfather passed through Ellis Island.

“We’re going to make sure that we essentially end illegal immigration once and for all,” Pence told NBC last month, explaining Trump’s positions. “And when all of that happens then, as a nation, he said we can give consideration to how we resolve issues around those that remain.”

Given the significance of Hispanic voters, immigration will no doubt be touchstone issue for the two running mates in their head-to-head televised encounter.