US to accept 10,000 Syrian migrants in a year, says White House 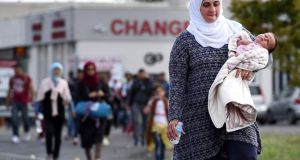 People cross the border between Hungary and Austria on September 10th, 2015, near Nickelsdorf, Austria. The US has made its first specific commitment towards increasing its acceptance of migrants from Syria. Photograph: Joe Klamar/AFP/Getty Images

US president Barack Obama has directed his administration to take in at least 10,000 people fleeing the conflict in Syria over the next year.

White House press secretary Josh Earnest said the US would “accept at least 10,000 refugees” over the next fiscal year, which starts on October 1st.

US secretary of state John Kerry told members of Congress on Capitol Hill in private meetings on Wednesday that the number of refugees accepted by the US could rise to 100,000 from 70,000 a year. His officials said not all the additional refugees would be Syrians.

An estimated four million Syrians have left the country during the civil war between the government forces of President Bashar al Assad, rebels and Islamic State militants. The US has come under fire for not doing more to alleviate the humanitarian crisis caused by the conflict that has sent tens of thousands of Syrian migrants fleeing to Europe.

The Obama administration has already agreed to resettle 1,500 refugees from Syria this year, well short of the numbers that Germany, Austria and the UK are accepting. Rejecting a suggestion the US response was “paltry,” John Kirby of the US state department said: “No country is more generous for settling refugees.”

The commitment is the first the US has made towards increasing its acceptance of migrants from the war-torn country.

But refugee advocates and some members of Congress say taking in an additional 10,000 people does not go far enough toward addressing the humanitarian crisis triggered by the war, which has prompted a massive influx into Europe.

In a letter distributed to House Democrats and seen by Reuters, Democratic Representative David Cicilline asked Mr Obama to accommodate 65,000 Syrians by the end of 2016.

Religious groups have called for the US to accept 100,000 Syrians.

European countries have taken in waves of migrants fleeing violence. Germany allowed 20,000 in over the weekend and is preparing for 800,000 this year.

Melanie Nezer, vice president of HIAS, a global refugee advocacy group, said allowing 10,000 more refugees from Syria is not an adequate response to the crisis at hand.

“This is totally within the realm of what the current system on autopilot could do. This is not time for autopilot. This is time to really ramp things up,” said Ms Nezer.

The US is conducting air strikes in Syria as part of its effort to fight Islamic State. The US currently admits a total of 70,000 refugees annually from around the world, and is due to increase that total by 5,000 for the fiscal year starting in October.

Mr Earnest would not say whether the 10,000 Syrians would be a part of that total, or in addition to it.

Mr Earnest said national security was a key concern in relation to admitting Syrians, as Syria is rife with anti-US militants. He noted intensive security screening for refugees could take up to 18 months.

“I do feel confident in telling you that the president will not sign off on a process that cuts corners when it comes to the basic safety and security of the American people and the US homeland,” Mr Earnest told reporters.

Congress cannot block the administration from setting limits on the number of refugees it admits from each region. But it can block funding needed for staffing agencies such as the Department of Homeland Security and the Department of Health and Human Services that handle the screening and resettlement procedures.

House Appropriations Committee aides said they had yet to receive a request for more money to accommodate an increase in Syrians, and declined to comment on the likelihood of approving such an increase unless it is formally submitted.

Senior Republican Senators Bob Corker and Lindsey Graham have said they are open to the idea of allowing more refugees, as long as they are subjected to security screenings.