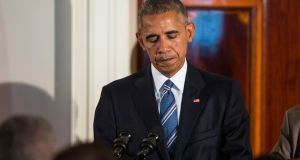 US president Barack Obama: Members of US Congress voted 97-1 to reject his veto on a Bill that would have allowed relatives of the victims of the September 11th, 2001, attacks to sue Saudi Arabia. Photograph: Al Drago/The New York Times

The US Senate handed President Barack Obama an embarrassing rebuke by rejecting his veto on a Bill that would have allowed relatives of the victims of the September 11th, 2001, attacks to sue Saudi Arabia.

The Democratic leader of the senate, Harry Reid of Nevada, was the only senator to side with the president in a 97-to-1 vote that tees up the Republican-controlled House of Representatives to deliver the first congressional vote to override a presidential veto during Mr Obama’s term of office.

The 9/11 commission used the 15th anniversary this month to campaign members of US Congress to back the Bill that would enable them to take legal actions against the Saudis for any role they had in the terror plot.

Mr Obama’s Democratic allies in congress, who have served as a bulwark for the president in blocking Republican-passed legislation reaching the White House for his 7½ years in the office, abandoned the president on the issue and joined forces with Republicans to block his veto.

“This is a decision I do not take lightly,” said Democratic senator Chuck Schumer, an author of the legislation and the likely next senate leader if his party wins enough seats in the November 8th elections.

“This Bill is near and dear to my heart as a New Yorker because it would allow the victims of 9/11 to pursue some small measure of justice, finally giving them a legal avenue to pursue foreign sponsors of the terrorist attack that took from them the lives of their loved ones.”

The US administration responded angrily to the congressional snub. Mr Obama’s press secretary, Josh Earnest, called it “the single most embarrassing thing the US senate has done since 1983,” castigating senators for “an abdication of their basic responsibilities as representatives of the American people.”

The Bill, the Justice Against Sponsors of Terrorism Act, amends a 1976 law guarding foreign governments from legal actions with certain immunity before the US courts,

In this way it would facilitate legal proceedings by the families who have long suspected the involvement of Saudi officials in helping the 9/11 hijackers.

Saudi Arabia denies providing any support to the 19 al-Qaeda attackers – 15 of whom were Saudi citizens – who killed almost 3,000 people.

The 9/11 Commission, the official US investigation into the attack, found no evidence implicating the Saudi government or senior Saudi officials in the attacks.