US presidential race already packed with 521 days to election 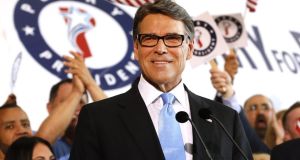 Former Texas governor Rick Perry at the announcement in Dallas yesterday of his candidacy for US president in 2016. Photograph: Ron Jenkins/Getty Images

With 521 days to go until the US presidential election, the field is already packed with candidates.

Far more Republicans have declared; among Democrats, former presidential contender Hillary Clinton is the frontrunner by some distance.

Perry said in a speech that sharply criticised US president Barack Obama on foreign policy and addressed economic inequality, a theme for most candidates.

The race would be a “show me, don’t tell me” election, he said, where voters would look beyond rhetoric at the past records.

The former governor’s first presidential bid collapsed in 2012 after campaign missteps and gaffes. During a debate in Michigan he couldn’t recall the three government agencies

he would dismantle, punctuating his brain-freeze moment with “Oops”.

Perry is unique among the candidates – he is the only one under indictment. Last year he was indicted on charges of abusing his office by threatening to veto funding for the office of an elected district attorney, Democrat Rosemary Lehmberg, unless she resigned after being arrested for drunk driving.

The field must narrow within nine weeks. Fox News and CNN have said they will allow only 10 candidates to participate in the first two debates, and they will be selected on national polls. The first debate, broadcast by Fox, takes place in Cleveland, Ohio, on August 6th.

No candidate stands out in the crowded Republican race as yet. A Fox News poll on Wednesday put Bush and Walker tied at 12 per cent, ahead of a bunched group. Another, by CNN/ORC on Tuesday, put Florida senator Marco Rubio leading with 14 per cent, 1 per cent ahead of Bush.

Recent polls show support for Clinton slipping but still in a commanding lead of more than 40 points over closest rival Bernie Sanders, the socialist senator from Vermont.

Sanders has stolen a march on former Maryland governor Martin O’Malley as the go-to candidate for diehard liberals wanting an alternative to the former first lady, whom they see as too close to Wall Street.

He has attacked Clinton for supporting the war in Iraq as a senator in 2003, a so-called wedge issue that Obama played to his advantage over her in 2008.

Chafee, who is seen as a long-odds candidate in the face of Clinton’s strong support and national profile, has touted an unusual campaign issue. He has called on the US to “be bold . . . and go metric,” asking Americans to leave behind inches and Fahrenheit and in favour of centimetres and Celsius.

“It doesn’t take long to realise that 34 degrees is hot,” he said.