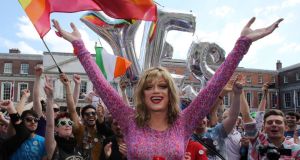 Tributes and expressions of pride continued to come from political figures in the United States on Saturday in response to Ireland’s unprecedented popular vote to make same-sex marriage legal.

Their personal pages on Twitter were awash with praise for the country’s decision to support same-sex marriage in a 62 per cent to 38 per cent vote.

White House aide Valerie Jarrett, senior adviser to president Barack Obama, posted a message on Twitter: “The Irish people have spoken - another step for equality! #LoveWins,” using a hashtag used by many others in the US supporting the vote.

US vice president Joe Biden said in a message posted by his office: “We welcome Ireland’s support for equality #LoveWins.”

The Democratic leader of the US House of Representatives Nancy Pelosi said on Twitter: “Congrats Ireland! Everyone deserves equality under their laws - no matter where they live, no matter who they love. #MarRef #LoveIsLove.”

Irish-American Martin O’Malley, the former Democratic governor of Maryland who is expected to announce his own presidential candidacy in the 2016 elections on Saturday, remarked on social media: “It’s a great day to be Irish - three cheers for marriage equality.”

Mr O’Malley, who led the passage of same-sex marriage legislation as governor in Maryland in 2012, arrives in Dublin today to deliver a paid speech on a rescheduled visit from last month when he cancelled a trip over the civil unrest in Baltimore, a city where he was mayor.

Maryland is one of only three states to have passed gay marriage by a popular vote. The other two are Washington and Maine.

Same-sex marriage is not legal across the United States, though it is permitted in 36 states along with the District of Columbia.

The US Supreme Court is expected to rule next month in two landmark cases that will decide on the legality of same-sex marriage bans in the remaining 14 states, rulings that could open the door for same-sex marriage to be recognised across the country.

Noting that Ireland and 19 other nations have gone further than the US in legalising same-sex marriage, The New York Times said in an editorial posted online on Saturday that the vote “gave a powerful boost to the quest for gay equality” and “sends an unmistakable signal to politicians and religious leaders around the world who continue to harbour intolerant views against gays and lesbians.”

Samantha Power, the Irish-born US ambassador to the United Nations, described the Irish referendum result as a “remarkable day for the people of Ireland. Proud of my Irish roots. #LoveWins.”

Writing on Twitter, she agreed with the sentiments expressed by Irish Times columnist Fintan O’Toole in an online article yesterday saying that he captured the “many meanings” of Ireland’s Yes vote, that lesbian, gay, bisexual and transgender people are “now [A]fully acknowledged part of the wonderful ordinaries of Irish life.”

Freshman US congressman Brendan Boyle, whose father’s home county of Donegal was among the 42 out of 43 constituencies that voted Yes on Friday, said: “Ireland just became the first country on Earth to vote to legalise #marriageequality #LGBTRights.”

Another Irish-American congressman Joe Crowley, whose mother emigrated from Co Armagh, posted a message online saying: “Thrilled to see the people of #Ireland make history by voting for love and equality! #YesEquality #MarriageEquality.”