America Letter: from the small claims courts to the Supreme Court, the US judicial system is a combative cockpit of American values 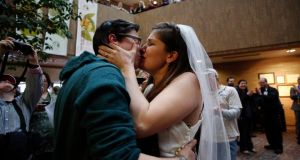 The highest-ranking court in the United States caused another stir this week when on Monday it put a halt to same-sex marriages in conservative Utah, suspending a federal District Court judge’s ruling that gays and lesbians have a constitutional right to marry in the state.

The Supreme Court ruling, from which none of the nine justices dissented, was seen as a sign that the court wants a go-slow approach on gay marriage and is unwilling to be rushed into a decision in one state that could open the door for gay union in all 50 states, extending it from the 17 (along with the District of Columbia) where it is legally recognised.

Same-sex marriage campaigners won two victories in the Supreme Court last year. The court struck down a federal law denying benefits to legally married same-sex couples and made a technical ruling paving the way for gay marriage in California. Neither decision granted an unconditional right to marry.

Given how little politicians can agree on across the road in the most divided Congress in generations, the Supreme Court has become an important arbiter on issues of conflict, much to the frustration of Justice Anthony Kennedy, the court’s swing voter, who sees the court’s newly enhanced pivotal role in American society as a symptom of a malfunctioning democracy.

Big box office
Arguments and judgment days are big box office at the court. For arguments in the two gay marriage hearings last year, campaigners crowded the street outside, while the public gallery was packed out inside. Reporters crowded into an overspill corridor along the side of the court where the judges could be heard but not seen. A few reporters who cover the court regularly helpfully whispered the names of each judge as they spoke to help other reporters, giving the charged hearings an antiquated feel.

The exchanges between justices and lawyers leading the arguments are lively and punchy. A lawyer can be responding to a query from one justice when a second justice quickly throws another while they are mid-response. It’s like sparring with multiple partners and can lead to some highly entertaining moments. Chief justice John Roberts, a regular at the Irish Embassy in Washington as a result of his wife’s strong Irish roots and their interest in Ireland, manages proceedings evenly and efficiently.

US courts tend to be far livelier than their Irish counterparts. American lawyers have an inner pit-bull they unleash much more quickly than Irish counsel, who prefer a more forensic, measured approaches.

Transatlantic differences of another sort emerged in one humorous moment in Seán Dunne’s cross-examination by an American lawyer for the National Asset Management Agency in his bankruptcy proceedings last month. After Dunne’s frequent use of the Irishism – he “would have” done this and “would have” done that – the lawyer asked him to clarify: “Do you mean you would have or you did?”

“This is like the wild west of courts,” one lawyer told me this week last Thursday. He was one of only a handful of lawyers in court, as most plaintiffs and defendants represent themselves. The court’s rules state that corporations must be represented by a lawyer. Our friend acted for Bank of America, which was being sued for management fees by a man claiming to be a representative of tenants in an apartment block.

Thursday’s 30 listed cases included a dispute between two men over an allegedly unpaid bill on painting and home improvement work; a woman’s claim against a housing authority for rain damage to her rug; and a bank seeking to recover a debt of $2,514 from a female customer.

For the most part, the court felt like Litigation for Beginners class as Magistrate Judge Diane Brenneman had to explain the workings of a court to the lay litigants. She handled them patiently and with occasional good humour, explaining in plain English how the parties must first agree to try to resolve the dispute before a mediator and then go to trial before her if they cannot reach a settlement.

She grew exasperated at one defendant who tried to continue talking over her after the woman had time to put forward her case. “You be quiet – I am summing up. You don’t get everything you want – time out!” said the magistrate in one of few Judge Judy moments of Thursday’s proceedings.

Judge Brenneman may not be trying to solve the legalities of great social conundrums of 21st century America that her colleagues at the Supreme Court tussle with on a regular basis but the time and attention she devoted to each case made it feel like she was. It’s affirming to see.

Equally impressive is the efficiency of the US courts. In terms of productivity, from the highest to the lowest court in the land, the US judiciary puts the country’s fractured legislature to shame.