US finds its strike in Mosul killed more than 100 civilians 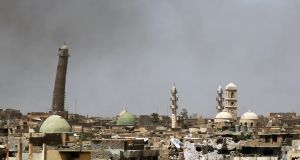 The attack in Mosul, Iraq, was one of the deadliest single incidents for civilians in recent memory in any major conflict involving the US military. Photograph: Ahmad al-Rubaye/AFP/Getty Images

US officials said on Thursday that a military investigation had found that more than 100 civilians were killed after a US air strike on a building in Mosul, Iraq, in March.

The investigation concluded that the US strike in the Al-Jadida district inadvertently triggered explosives placed in the building by Islamic State fighters, causing the building to collapse.

It was one of the deadliest single incidents for civilians in recent memory in any major conflict involving the US military, which prides itself on efforts to limit civilian fallout.

He said 101 civilians in the building were killed, and another four died in a nearby building. He added that 36 civilians remain unaccounted for. The deaths represent about a quarter of all civilian deaths since the US air campaign began.