US boy arrested over ‘bomb’ clock moving to Qatar

Ahmed Mohamed, the teen arrested last month when he brought a homemade clock to his Texas school, says he's focused on getting out a positive message. Video: Reuters 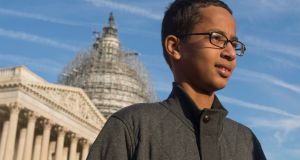 Ahmed Mohamed, the teenager who became a national flash point after he was detained and handcuffed in an American high school for bringing in a homemade clock, is moving to Qatar with his family.

The Young Innovators Program at the Qatar Foundation for Education, Science and Community Development said it was giving Ahmed, a 14-year-old from Irving, Texas, a full scholarship.

The foundation works in partnership with several US universities, including Carnegie Mellon, Texas A&M, Georgetown and Northwestern.

Ahmed’s family said the foundation would fund his high school and undergraduate education.

“I really enjoyed my time at Education City, where I met other kids like me who are part of the Young Innovators Program,” Ahmed said in a statement about time he spent in Qatar this month.

“Qatar was a cool place to visit. I loved the city of Doha because it’s so modern. I saw so many amazing schools there, many of them campuses of famous American universities. The teachers were great. I think I will learn a lot and have fun, too.”

Ahmed was detained September 14th when he showed a teacher at his school, MacArthur High, his homemade clock, which the teacher feared was a bomb.

No charges were filed, but his detention provoked widespread accusations of racial profiling, sparking a larger discussion of Islam, immigration and ethnicity.

In a statement, Ahmed’s family said it was “overwhelmed by the many offers of support.”

He has visited Google and met with leaders from Jordan, Turkey and Sudan. Visiting the White House on Monday, he hugged and spoke briefly to US president Barack Obama.

Mohamed El Hassan, Ahmed’s father, told the paper that the family would move to a place where his children could study and would be “accepted by that country.”