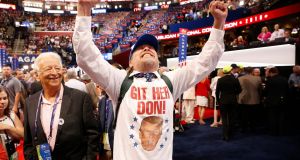 A delegate reacts after Donald Trump was officially nominated during the roll call of states for the nomination of Donald Trump on the second day of the 2016 Republican National Convention at Quicken Loans Arena in Cleveland, Ohio. Photograph: Michael Reynolds/EPA 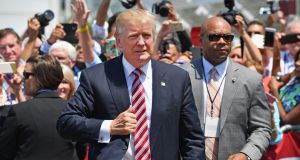 Donald Trump sought to draw a line under the scandal around his wife’s plagiarism of a Michelle Obama speech by releasing a statement from one of his staff taking the blame for the incident that has overshadowed the Republican convention in Cleveland.

The Republican presidential candidate, who will accept his party’s nomination at the headline speech of the week on Thursday night, posted the statement from Meredith McIver, who apologised for reproducing parts of Mrs Obama’s speech from the 2008 Democratic convention for Melania Trump’s speech on Monday night.

She revealed that she offered her resignation to Mr Trump over the controversy but that the New York businessman rejected it, telling her, according to Ms McIver: “People make innocent mistakes.”

Identifying herself as “an in-house staff writer for the Trump Organisation” and a “long-time friend and admirer of the Trump family,” Ms McIver said that while working with Mrs Trump on her speech, they discussed people who inspired her and what she wanted to include in her prime-time address for what was a rare public speaking engagement for the Slovenian-born former model. Mrs Obama was a person she always liked, she was told by Mrs Trump (47), the billionaire’s third wife.

“Over the phone, she read me some passages from Mrs Obama’s speech as examples. I wrote them down and later included some of the phrasing in the draft that ultimately became the final speech,” Ms McIver said.

“I did not check Mrs Obama’s speeches. This was my mistake, and I feel terrible for the chaos that I caused Melania and the Trumps, as well as Mrs Obama. No harm was meant.”

The statement meant the plagiarism controversy dominated the third day of the four-day national party convention which Mr Trump had hoped to use to soften his brash image following the party’s polarising primary election. 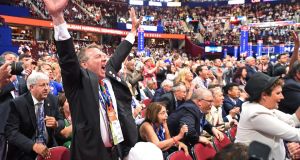 Over the Top - scenes from the Republican National Convention

Mr Trump’s campaign spent the better part of 36 hours rebuffing accusations of plagiarism before conceding that the passages were innocently and mistakenly copied from Mrs Obama, but not before Trump campaign chairman Paul Manafort continued to insist that this was a media-orchestrated controversy and “not meaningful at all.”

Ms McIver, for her part, tried to end the frenzy of attention around the speech, the first in a series of personal testimonials aimed at humanising the bombastic Trump.

“I apologise for the confusion and hysteria my mistake has caused. Today, more than ever, I am honoured to work for such a great family,” she wrote.

Away from the chaotic fallout of the speech, the Republican Party’s reconciliation efforts to patch up internal divisions and unify the party for the four-month national election campaign against Mrs Clinton continued.

Ted Cruz, the Texas senator dubbed “Lyin’ Ted” by Trump during the Republican primary election, joined the reunification efforts along with two other losing candidates in the hard-fought party race, Florida senator Marco Rubio and Wisconsin governor Scott Walker, on stage in prime-time address on the third night of the convention. It comes a day after Trump was official confirmed as the party’s presidential nominee.

Ahead of those events, Cruz, the conservative firebrand who lost to Trump with just over a quarter of his convention delegates, did not endorse the billionaire when he spoke at a Texas convention delegation party. He didn’t even mention him by name.

“In an amazing campaign field of 17 talented, dynamic candidates, we beat 15 of those candidates. But we just didn’t beat 16,” said the freshman senator whose conservative supporters are targets for Trump in shoring up the Republican base.

Trump managed again to upstage the Texas senator at his own “thank you” event. As Cruz referred to Trump – “our party now has a nominee” – to boos from the crowd, Trump’s Boeing 757 jet, dubbed “Trump Force One,” passed behind him in the background. Cruz’s grimace at the boos turned to a full-blown smile.

Cruz fans, many Texan wearing cowboy hats, appeared to support Trump through gritted teeth as they listened to country western music at Tusker’s Roadhouse on the shores of the Cuyahoga River a few miles from downtown Cleveland.

“We had an election. He got more votes than Senator Cruz. That’s how it goes,” said Eric Stahlfeld from Washington state. Asked about Trump calling him “Lyin’ Ted”, he said: “That will be one we will remember.”

“You know the process is the process. He won it fair and square so he is the guy,” said Brett Kulbis from Hawaii, wearing a Cruz 2016 T-shirt and campaign badges.

Is he happy with Trump? “I will vote for him but that’s probably about it.”