Trump’s momentum picks up ahead of five state primaries 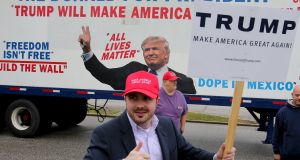 Bob Bolus, a supporter of US Republican presidential candidate Donald Trump, gives the thumbs up to drivers as they pass by on Super Tuesday in Middleburg Heights, Ohio. Photograph: Aaron Josefczyk/Reuters

Donald Trump could take a giant step on Tuesday toward securing the Republican presidential nomination if he wins the Florida and Ohio primaries, which would intensify pressure for rivals from the party establishment to step down from the race.

Mr Trump has the potential to sweep five big states holding primaries for the November 8th election: Florida, Ohio, Illinois, North Carolina and Missouri. He could knock out his two mainstream rivals, Ohio governor John Kasich and US senator Marco Rubio of Florida, if he wins their states.

The businessman has a significant lead over Mr Rubio in opinion polls in Florida, but is neck and neck with Mr Kasich in Ohio. Any win by either Mr Rubio, Mr Kasich or Texas senator Ted Cruz would give at least a small degree of hope to Republicans battling to deny Mr Trump the nomination.

Mr Trump said on Tuesday that his momentum was already drawing in establishment Republicans who had previously baulked at his candidacy but now see him as the likely nominee.

“They’re already calling,” he told NBC’s Today programme, without naming names. “The biggest people in the party are calling.”

Victories in the five states for Mr Trump could make what once seemed inconceivable a strong probability, putting the 69-year-old New York real estate mogul, who has vowed to deport 11 million illegal immigrants and impose some protectionist trade policies, on the road to representing the Republican Party in the November election. 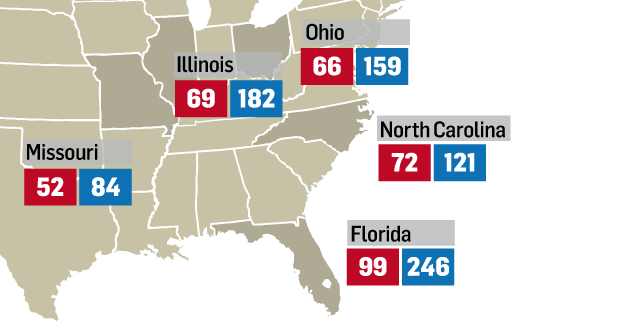 Ohio and Florida are winner take all for Republican Party

Opinion polls gave her a big lead in Florida and North Carolina, but showed Mr Sanders gaining ground in Ohio, Illinois and Missouri, a possibly worrisome sign for Mrs Clinton after Mr Sanders’s surprise victory in Michigan a week ago.

“I voted for Bernie because I want to see a real change to how we do things in this country,” Jackie Zydeck (52) an attorney for the federal government, said after voting in Chicago’s liberal Albany Park neighborhood.

Mr Trump held rallies in Florida, Ohio and North Carolina on Monday and said establishment Republicans who have laboured to stop his outsider candidacy needed to rally to his cause.

An outbreak of clashes between Mr Trump’s supporters and protesters that forced him to cancel a rally in Chicago on Friday, and scattered protests at some of his campaign events this week, have prompted more concerns from mainstream party figures.

“I believe the ideal outcome in this campaign is to have someone not named Donald Trump coalesce the party with 1,237 delegates and go on to defeat Hillary Clinton in November,” Mr Rubio told Fox News. “If he’s the nominee he is not going to be able to unite the party. In fact I think he’ll bitterly divide it.”

“Think of the images that have been broadcast across this world about how we are picking a president here,” Mr Kasich said on Monday, adding that the footage of protests and violence could be used to fuel propaganda that America was “broken”.