Trump rumbles on, gathering support from all corners of US

America Letter: His appeal is winning votes from all, including Irish and Scots-Irish 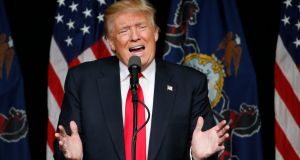 Like Trump, McKiernan is a businessman. A former Wall Street executive, he won’t, however, don the businessman’s “Make America Great Again” baseball cap, at least not since Trump mocked the appearance of Heidi Cruz, the wife of his chief rival, Ted Cruz.

The well-dressed New York supporter tells me about the businessman’s broad appeal: he’s not Hillary Clinton and he’s for jobs. Many of his Wall Street buddies are supporting him too, he says.

The point was proved in Tuesday’s New York primary where the billionaire scored his biggest win so far, breathing new life into his anti-establishment bid that has rocked US political elites. He won more than 60 per cent of Republicans in the fourth most populous state, his home state.

Each state contest in this head-turning presidential election reveals new types of Trump supporters. In Iowa, it was farmers; in New Hampshire (and everywhere else), blue-collar workers frustrated by 15 years of frozen wages; in Florida, country-club Republicans and retired professionals; in New York, well-paid executives and college graduates.

And there are the Irish. While many Irish-Americans in New York City voted for Clinton in places such as Woodlawn and North Riverdale in The Bronx (though Bernie Sanders won some Brooklyn neighbourhoods), there were pockets for Trump.

Take the neighbourhood of Breezy Point in Queens. Out of 319 votes cast by Republicans, Trump won 218. Among Democrats, Sanders beat Clinton, winning 186 of 263 votes cast.

Then there are the other Irish: the Scots-Irish, descendants of settlers from the Scottish borders and Ulster who emigrated in the 17th century and settled along the Appalachian Mountains, from Pennsylvania down to Virginia,Kentucky, North Carolina, Tennessee and beyond.

Scan an election map of the US for Trump’s biggest wins across 35 state contests held so far and you will see the areas shaded darkest in his favour are along and either side of the spine of the Appalachians.

Add to this the property mogul’s victories in New York, Massachusetts, Nevada and Arizona. Pennsylvania votes on Tuesday with four other northeastern states and, to complete Appalachia, West Virginia picks nominees on May 10th. Expect to see dark shades of Trump here too.

“We have always been a freedom-loving people. We have never really been into the system,” says Dave “Mudcat” Saunders, a political strategist and self-professed “Scots-Irish hillbilly” who advised Democrats Jim Webb and Mark Warner on their US senate and gubernatorial bids in Virginia.

“Trump resonates because he is straight up; he says it like it is,” says Saunders, whose ancestors came from Co Antrim around 1740.

As for Trump’s rhetoric, Saunders explains his brash-talking appeal among the free-spirited Scots-Irish.

“The Scots-Irish hillbillies of the south Appalachian mountains are the one ethnicity in this country that you can hit with impunity. There’s nothing politically incorrect about jumping on a hillbilly.”

Even though he is a Democrat, Saunders says much of what Trump decries, be it trade deals that have resulted in the loss of jobs or unfairness in the economy, “touches our heart”. Sanders’s policies are popular for the same reason, he says.

He saw the first ripples of the wave Trump is riding during Mark Warner’s run for governor in 2001. In the years after the 1994 North America Free Trade Agreement, workers were told to retrain, but it did not help as the jobs were gone. This led to a lot of anger.

“Retraining for what?” Saunders heard a lot. “Political economic populism is a very loud language and it requires a loud voice.”

On the decibel scale, Saunders sees Trump in the mould of Andrew Jackson, the first Scots-Irish president (and slave-owner who, it was decided this week, is to be replaced on the $20 bill by abolitionist Harriet Tubman), and Theodore Roosevelt who tackled the “1 per centers” in the 19th and 20th centuries respectively, with campaigns aimed at the common man.

“They restored economic fairness,” Saunders says. “It comes about every 100 years, and it is time again.”