Brexit maths: Deal success will depend on these parliamentary numbers

The magic number is 320, a majority of the 639 voting MPs in the Commons 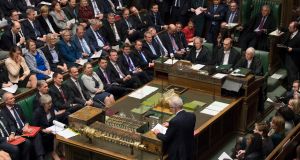 British prime minister Theresa May said “difficult days lie ahead” as she announced her Brexit deal had been approved by her cabinet.

One of the chief obstacles could be the House of Commons, where a simple majority of MPs will need to vote for the blueprint for the deal to be given the green light.

The magic number is 320, a majority of the 639 voting MPs in the Commons which excludes suspensions, the Speaker, three Deputy Speakers and seven Sinn Féin MPs who abstain from attending the British seat of parliament.

The parliament website lists 93 MPs who are ministers of government and would therefore be bound to support Theresa May’s Brexit plans owing to collective responsibility.

In the past, ministers or cabinet members who do not support the Prime Minister have resigned, as was the case with Boris Johnson over the Chequers deal and his brother Jo over disillusionment with the Brexit strategy.

In addition to that, loyalists to Mrs May and the British government would vote in favour of the deal, as well as a number of Brexiteer MPs who may have been spooked by the PM’s message that it was this deal, no deal or no Brexit.

On the other side of the debate, the Liberal Democrats, Greens and Plaid Cymru have said they are opposed to a deal so this adds 17 to the no side.

The Democratic Unionist Party’s stance on the Brexit deal is uncertain. Arlene Foster has said the British prime minister is “fully aware of our position and concerns” over Northern Ireland being treated differently to the rest of the UK.

It seems unlikely the Scottish National Party would support the deal given Nicola Sturgeon said the agreement would be “a bad one for Scotland”.

There is division within the Conservative party too, with the European Research Group, led by Jacob Rees-Mogg, claiming it has 80 MPs ready to vote against what it sees as Mrs May’s capitulation to Brussels.

Opponents suggest the number would be whittled down under a concerted offensive of arm-bending by the Tory whips, so it may finally be considerably less.

This means Mrs May could need to find up to 100 votes — but perhaps more realistically somewhat less — from elsewhere.

So the Prime Minister may well need to extend an olive branch to Labour, which also has its own divisions between those like Chuka Umunna who oppose Brexit, those like Caroline Flint who support it reluctantly because their constituents voted to leave, or those like Kate Hoey who are ardent Brexiteers.

The question is how many of Jeremy Corbyn’s MPs are prepared to defy him and support Mrs May, reasoning that a no-deal Brexit, which they fear could bring about an economic disaster, would be a worse outcome. - PA