Timeline: Key events in the history of US gay rights

From Stonewall Inn to Harvey Milk, an Ellen DeGeneres sitcom and Obama 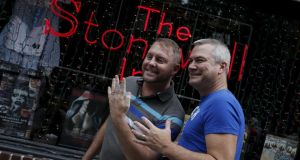 Charles Wooton and Keith Newport, both from Atlanta, Georgia, show their wedding rings outside the Stonewall Inn in the Greenwich Village, New York. Photograph: Mike Segar/Reuters 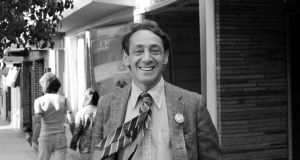 Gay right champion Harvey Milk in front of his castro Street Camera Store circa 1977. In 1978 Milk was shot dead along with Mayor George Moscone by a former city supervisor. Photograph: Dan Nicoletta

The US Supreme Court has legalised same-sex marriage nationwide, finding that the Constitution’s guarantees of due process and equal protection under the law mean that states cannot ban gay marriages.

Here is a look at some key events in the history of gay rights in the United States. 1950: The Mattachine Society, considered the first national US gay rights organization, is founded in Los Angeles.

1958: The US Supreme Court, in the case One, Inc v Olesen, backs the free-speech rights of a gay magazine after US postal officials and the FBI labeled it obscene and prohibited its mail distribution. It is seen as the first gay rights case before the Supreme Court.

1978: Gay rights champion Harvey Milk of San Francisco’s Board of Supervisors is shot dead along with Mayor George Moscone by a former city supervisor who is later cleared of murder charges, being convicted instead on lesser charges.

1982: Wisconsin becomes the first state to prohibit discrimination based on sexual orientation.

1986: The US Supreme Court, in the case Bowers v Hardwick, upholds a Georgia sodomy law, ruling consenting adults have no constitutional right to engage in homosexual acts even in private.

1987: Hundreds of thousands of demonstrators march in Washington, faulting President Ronald Reagan’s response to the AIDS epidemic and demanding more federal money for AIDS research and treatment. The US AIDS epidemic in the 1980s disproportionately involved gay men.

1996: The US Supreme Court, in the case Romer v Evans, throws out a Colorado measure approved by voters that denied gays protections against discrimination.

1997: In a pivotal popular culture moment, the main character in Ellen DeGeneres’ sitcom comes out as gay, just as the comedian herself had done.

2000: The US Supreme Court, in the case Boy Scouts of America v Dale, decides the Boy Scouts can bar gays as troop leaders.

2003: The US Supreme Court, in the case Lawrence v Texas, overturns its Bowers v. Hardwick ruling, throwing out a Texas sodomy law prohibiting two people of the same sex from certain sex acts.

2004: Massachusetts becomes the first state to legalise same-sex marriages after a state court finds banning them violates the state constitution.

2010: President Barack Obama signs a law repealing the 1993 “don’t ask, don’t tell” policy that had banned gays from serving openly in the US military.

2013: The US Supreme Court, in the case United States v Windsor, rules unconstitutional a 1996 law that declared for the purposes of federal benefits marriage was defined as between one man and one woman. Afterward, an increasing number of states allow gay marriage.

2015: On April 28th, the US Supreme Court hears arguments in a case in which same-sex couples challenge state bans on gay marriage.

On June 26th, the Supreme Court rules that the US Constitution provides same-sex couples the right to marry as the justices in a 5-4 decision throw out state bans on same-sex marriage. Reuters