Three more US states vote to legalise marijuana use 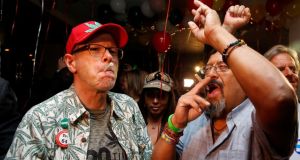 William Britt and Al Moreno celebrate in Los Angeles after Californians voted to pass proposition 64, legalising recreational use of marijuana in the state. Photograph: Jonathan Alcorn/Reuters

Voters across the United States also cast their ballots in referendums on some 150 statewide measures, 17 in California alone, attracting campaign contributions there of some $473 million (€431 million), with scores more city- or county-wide citizen ballot initiatives.

Most dramatically, they endorsed propositions in California, Massachusetts and Nevada that legalise recreational use of marijuana, joining four other states that have previously done so. Arizona went against the tide, rejecting A proposal. As medical and retail cannabis operations have spread across the US, legal marijuana has become the fastest-growing industry in the US, with some analysts projecting sales to reach $22 billion by 2020. Florida, Arkansas and North Dakota joined 25 states which have made medical use legal.

On the death penalty, Oklahoma passed a measure to reaffirm the state’s commitment to the death penalty after the state attorney general suspended executions last year. And Nebraska reversed its opposition to capital punishment, reinstating the electric chair that legislators abolished in 2015.

Arizona, Washington, Maine and Colorado approved measures to raise the minimum wage while South Dakota defeated attempts to lower it for under-18-year-olds.

Indiana and Kansas both passed so-called “right to hunt” measures on Tuesday by wide margins.

Republicans won control of governors’ offices in Missouri, New Hampshire and Vermont, picking up a trio of previously Democratic seats in their quest to expand their statehouse leadership to its strongest levels in decades.

The governors’ contests in a dozen states were part of a battle for statehouse supremacy that also included nearly 6,000 state legislative elections. Republicans had controlled more than two-thirds of the nation’s legislative chambers, as well as 31 of the 50 governors’ offices. That rose to 38.

Across the country voters were also were electing fellow citizens to every sort of public office and on every rung of the political ladder from local sheriff to district attorney to state treasurer. Not though, as popular lore would have it, to dog catcher, the job that has long supposedly epitomised America’s ultra-democratic tradition.

In fact only one town, tiny Duxbury in Vermont, elects its dog catcher these days. In March of 2014, residents re-elected Zeb Towne, over a sole vote of opposition – that of his wife. “She’s mad about the late nights I have to go out on those calls,” Towne said. Whether he was re-elected last night is not known yet.

Little is known about the one-time incumbents of this job when it was elected more widely, although a recent Billboard obituary of Col Tom Parker, Elvis Presley’s long-time manager, reported that he successfully ran for dog catcher in Tampa in 1941.