A founding member of Southern California rock band the Eagles, Glenn Frey wrote and performed lead vocals on many of the band's songs. Here is a selection of his best known hits. 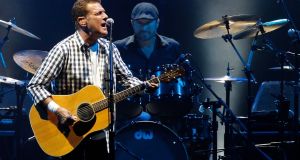 Glenn Frey performs at a concert in honour of Monaco’s Prince Albert II and his fiancee Charlene Wittstock in Monaco in 2011. Photograph: Reuters 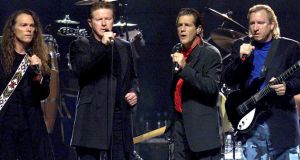 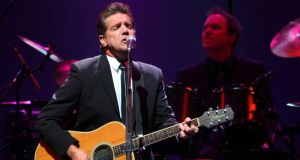 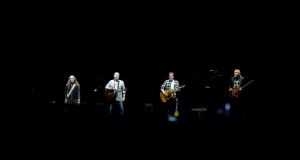 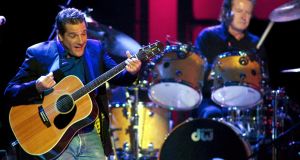 Singer/guitarist Glenn Frey of the Eagles, with singer/drummer Don Henley in the background, performs the song ‘New Kid In Town’ in Las Vegas in 2003. Photograph: Reuters

Glenn Frey, the prolific guitarist, singer, songwriter and founding member of the Eagles, died on Monday at age 67, the American rock band known for ‘Hotel California’ and dozens of other hits said on its website.

The Eagles, whose album, Their Greatest Hits 1971-1975, is the second-best-selling record of all time in the United States, helped create the freewheeling soundtrack of 1970s America and remain ubiquitous on rock radio nearly half a century later.

Their blend of rock with country music influences fuelled their success with hit songs such as Desperado, Already Gone and Take It to the Limit.

Frey collaborated with drummer Don Henley to co-write many of the band’s biggest hits.

While Henley most often sang lead vocals for the band, Frey played guitar and piano, was key to the band’s harmony as a back-up vocalist, and at times sang lead. His performances on Take It Easy and Peaceful Easy Feeling on the band’s debut album in 1972 helped rocket the Eagles to fame, and he later sang lead on hits Lyin’ Eyes and Already Gone.

Frey died a little more than a week after another rock great, David Bowie, died at age 69 in New York, apparently of liver cancer.

Detroit-born Frey and Henley co-founded the Eagles in 1971 in Los Angeles after playing backup for rock singer Linda Ronstadt.

Henley in a statement praised Frey as the “one who started it all” for the Eagles. “He was the spark plug, the man with the plan,” Henley said.

“He had an encyclopaedic knowledge of popular music and a work ethic that wouldn’t quit. He was funny, bull-headed, mercurial, generous, deeply talented and driven.”

After the Eagles disbanded in 1980, Frey had a successful solo career, recording the songs The One You Love and The Heat Is On.

Several of his compositions were for films or TV shows, and Frey took on a side career as an actor, including a small part in 1996 film Jerry Maguire. In 1994, the Eagles reunited and released an album titled Hell Freezes Over.

The name jokingly referred to Henley’s previous statement that the band would only get back together when “hell freezes over.”

Henley said he viewed Frey as a kind of brother, but acknowledged that, like in many families, “there was some dysfunction” in the relationship.

The Eagles, who were inducted into the Rock and Roll Hall of Fame in 1998 and have played many sold-out shows since their reunion, most recently completed a two-year tour last July.

Frey, in an interview with the Tampa Bay Times in 2012, credited his band members’ physical health as one reason for their success. “We managed to get off the party train pretty early,” he told the paper. But last year, Frey’s health took a bad turn, as he suffered from intestinal problems.

The Eagles had been slated to join songwriter Carole King, “Star Wars” director George Lucas and others in receiving the prestigious Kennedy centre honours in Washington last month.

But in November, the centre announced the Eagles could not participate because of Frey’s health, and said the award would be presented in 2016. “Thank you for the music that paved the way for so many others,” country star Brad Paisley said in praising Frey on Twitter.