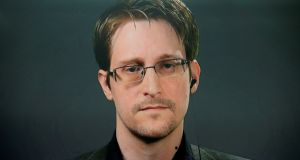 Edward Snowden speaking via video link during a news conference in New York City last week. The Washington Post said he should show himself “willing to go to jail for [his] beliefs”. Photograph: Brendan McDermid/Reuters

The Washington Post has stunned many people in the United States, including a large section of the country’s journalistic community, by coming out against a pardon for whistleblower Edward Snowden.

Despite the newspaper having been responsible for publishing leaks by the former National Security Agency (NSA) contractor, its latest editorial urges President Barack Obama not to pardon him.

The paper’s editorial board dismisses the call by human rights organisations for Mr Snowden to receive presidential clemency because of his “noble purposes” and the policy changes prompted by the mass surveillance revelations that emerged from his leaking of classified documents.

The board states that by making the truth public, not least through its own reporters, Mr Snowden enabled “the American public to learn for the first time that the NSA was collecting domestic telephone ‘metadata’ – information about the time of a call and the parties to it, but not its content – en masse with no case-by-case court approval.”

It then concedes that the NSA’s activities violated federal law and posed risks to privacy, which was later the subject of “corrective legislation”.

But the editorial accuses Mr Snowden of pilfering and leaking the separate overseas NSA internet-monitoring programme, Prism, “that was both clearly legal and not clearly threatening to privacy . . .

The Washington Post believes Mr Snowden should come home and “in the best tradition of civil disobedience” show himself “willing to go to jail for [his] beliefs”.

It continues: “Mr Snowden hurt his own credibility as an avatar of freedom by accepting asylum from Russia’s Vladimir Putin, who’s not known for pardoning those who blow the whistle on him.”

The publishing of the editorial coincides with the release of Oliver Stone’s movie, Snowden, and a campaign by US civil liberties groups to persuade Mr Obama to offer Mr Snowden a pardon.

Former presidential candidate Bernie Sanders is one of more than 20 other prominent American public figures to have called for clemency for Mr Snowden.

The Washington Post’s editorial has drawn fire from Glenn Greenwald, one of the journalists involved in placing the Snowden leaks in the public domain.

He wrote that the Post had “achieved an ignominious feat in US media history: the first-ever paper to explicitly editorialise for the criminal prosecution of its own source – one on whose back the paper won and eagerly accepted a Pulitzer Prize . . .

“Even more staggering than this act of journalistic treachery against the paper’s own source are the claims made to justify it.”

Two other newspapers that published Mr Snowden’s revelations – the Guardian and the New York Times – have called on the US administration to allow him to return to the US without facing any charges.