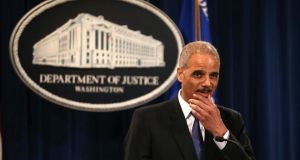 US attorney General Eric Holder during a news conference at the justice department yesterday in Washington. Mr Holder announced he has ordered an investigation into whether criminal activity took place at the Internal Revenue Service. Photograph: Doug Mills/The New York Times

Not since the covert surveillance exposed during the Watergate scandal of the 1970s has such a rash of revelations about spying and seemingly politically motivated investigations emerged publicly in the United States.

The controversy over the targeting of conservative political organisations by the US tax authorities, the Internal Revenue Service (IRS), rumbled on yesterday when the attorney general, Eric Holder, ordered an investigation into whether criminal activity took place at the tax-collecting agency.

Whether they were criminal or not, the actions of the IRS were “outrageous and unacceptable”, said Holder, echoing comments made by President Barack Obama on Monday.

“I’ve got no patience with it,” said Obama. “I will not tolerate it and I will make sure that we find out exactly what happened on this.”

The Justice Department and the FBI will investigate whether the IRS broke any criminal laws by applying special scrutiny to conservative groups. The inquiry will take several days and will determine how US tax officials selected these organisations for greater oversight about their tax status.

The IRS apologised last Friday for what it described as inappropriate scrutiny of tax-exemption requests by conservative groups with “tea party” or “patriot” in their names. The scrutiny of the conservative political groups appears to have started with IRS officials in Cincinnati.


Damage limitation
Obama sought to limit the damage as political leaders have called for hearings into why IRS officials applied greater demands on Tea Party and other conservative groups linked to the Republican Party seeking tax-exemption status for non-profit groups from 2010 to 2012, even though none were denied.

Republican Mitch McConnell, the Senate minority leader, said this was “just the beginning of the story” into how Obama’s administration dealt with political enemies.

“This is no little thing,” he told conservative website Breitbart. “This is a big thing. The good news about it is they finally got caught. They finally messed with an agency everybody fully understands.”

As the fire was growing on the IRS scandal on Monday, the Associated Press news organisation disclosed that it had been told by the Justice Department that federal investigators had secretly seized two months of phone records for its reporters and editors, including home and mobile phones, to find the sources of information leaks.

The organisation described the record seizures as a “serious interference” with its constitutional rights to gather and report the news, calling them a “massive and unprecedented intrusion”.

The seizures are thought to be connected to a government investigation into leaks a year ago about how the CIA foiled a Yemen-based plot to bomb an airline as recounted in a news story in May 2012.

The snooping that has emerged over recent days has not just been confined to government agencies. Financial news and information company Bloomberg apologised on Monday for allowing its journalists access to sensitive data about how customers used the company’s information terminals.

The scandal dates back to 2011 when UBS complained after a Bloomberg Television host indicated on air that he had monitored the terminal logon information for a rogue trader, Kweku Adoboli, in the bank’s London operations to check his employment status.


‘Inexcusable’
Matthew Winkler, editor-in-chief of Bloomberg News, said the accessing of “limited” client information was “inexcusable” and that reporters should not have had access to data “considered proprietary”.

The apology has not stopped the crisis deepening as central banks around the world, including the European Central Bank and the US Federal Reserve, said they were examining Bloomberg’s use of the data. The Bank of England described the practice as “reprehensible”.

The spate of spying stories took on an international flavour when Russia’s security services yesterday claimed they had arrested a CIA agent in a blond wig and baseball cap posing as an employee of the US embassy in Moscow trying to recruit a Russian counter-intelligence officer as a double agent.

Ryan Fogle, a third secretary at the embassy, was carrying technical equipment, disguises, written instructions and a large sum of money when he was detained, Russia’s Federal Security Service said.

The Russians said Fogle was trying to recruit an agent who specialises in the Caucasus, the volatile region in southern Russian where the Boston bombing suspects emigrated from and where suspect Tamerlan Tsarnaev may have become radicalised by militant jihadist groups.