Six killed as tornadoes rip through US Midwest

A fast-moving storm system triggered multiple tornadoes in Illinois and Indiana on Sunday (November 17), killing at least two people, injuring about 40 and flattening large parts of the city of Washington, Illinois as it crashed across the Midwest. 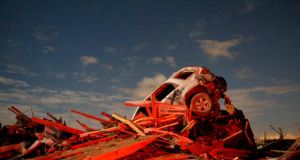 A vehicle sits on a pile of debris from the destruction caused by a tornado that touched down in Washington, Illinois yesterday. Photograph: Reuters

A fast-moving storm system triggered multiple tornadoes yesterday that killed at least six people and flattened large parts of a town in Illinois as it tore across the Midwest, authorities said.

The storm also forced the Chicago Bears to halt their game against the Baltimore Ravens and the NFL fans at Soldier Field to seek shelter as menacing clouds rolled in. Chicago’s two major airports also briefly stopped traffic while the metropolitan area was under a tornado watch.

A small farmhouse there took a direct hit, according to the NWS survey team report. “The homestead was totally destroyed with only the foundation remaining,” the report said.

A total of 80 tornado reports were received along with 358 reports of damaging winds and 40 reports of large hail, according to Rich Thompson, a lead forecaster with the weather service’s Storm Prediction Center in Norman, Oklahoma.

The storm moved dangerously fast, tracking eastward at 97 kph and Thompson said the bulk of the tornado damage from the storm occurred over a period of about five hours.

“We’ll still have a wind damage threat across Pennsylvania and New York into the overnight hours,” he said late yesterday.

An estimated 140,000 were without power in Illinois last night, along with about 100,000 Michigan residents, due to storm-related outages, according to utility providers.

About 50,000 outages were also reported in Indiana and some 3,000 people were without power in Kentucky.

The town of Washington, Illinois, was hit especially hard by the tornadoes that Mr Thompson said had ripped through Indiana and Kentucky as well as Illinois and a small corner of Ohio.

“It’s a sad day in Washington. The devastation is just unbelievable. You just can’t imagine. It looks like a war zone in our community,” said Washington Mayor Gary Manier.

“It’s kind of widespread and went right through our community of 15,000 people,” he added, saying hundreds of homes in the town, 233 km southwest of Chicago, had been destroyed.

The state Emergency Management Agency said one person was killed in Washington. Thirty-one people injured by the storm were being treated at St. Francis Medical Center, one of the main hospitals in nearby Peoria, according to hospital spokeswoman Amy Paul. Eight had traumatic injuries.

Two people were killed in Washington County, Illinois, about 320km south of Peoria, said Illinois Emergency Management Agency spokeswoman Patti Thompson. The agency estimated that hundreds of homes were damaged and at least 70 leveled across the state.

Washington County coroner Mark Styninger said the two people who died there were elderly siblings. The 80-year-old man and his 78-year-old sister suffered massive trauma when their home was demolished in the storm, Styninger said.

“It wiped out homes, mobile homes,” said Charles Taylor, deputy director of the Emergency Services and Disaster Agency in Massac County. “It downed trees, power lines. We have gas leaks, numerous injuries whether they were in mobile homes, or outdoors, even in the motor vehicles, people have been trapped.”

“We have reports of homes being flattened, roofs being torn off,” Sara Sparkman, a spokeswoman for the health department of Tazewell County, Illinois, where Washington is located, said in a telephone interview. “We have actual whole neighborhoods being demolished by the storm.”