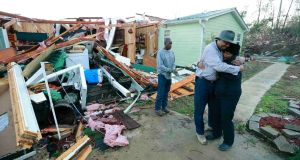 Phyllis Evans gets a hug from Harvey Payne after a tornado struck Holly Springs, Mississippi on Thursday. Photograph: Reuters

Floods in Missouri forced hundreds of residents out of their homes on Tuesday after four days of storms sent rivers to record levels, killing at least 13 people, closing hundreds of roads and halting shipping on the swollen Mississippi river.

A week of chaotic weather continued throughout the United States as a storm system that spawned deadly tornadoes in the Midwest and Southwest pushed north. More than 40 people across the country have died of weather-related causes during the Christmas holidays in the past week.

Missouri has been pounded by downpours since Saturday, and forecasters warned that its major rivers could crest between Wednesday and Saturday at records.

“Flooding on the middle portion of the Mississippi River and its tributaries may reach levels not seen during the winter months since records began during the middle 1800s,” Alex Sosnowski, senior meteorologist, wrote on AccuWeather.com.

At the confluence of the Mississippi and Missouri rivers, about 32 km north of St. Louis, residents of the towns West Alton and Arnold were told to evacuate on Tuesday.

“Access to and from town will be lost in a matter of hours,” the local Rivers Pointe Fire District said in an alert. Video from local news helicopters showed homes in West Alton with water almost at roof levels.

Arnold residents scrambled to find hotels or move to shelters.

Sarah Quinn (18) said she and her great-grandparents were moving to a hotel room after police turned off the power at her subdivision. Her sister, grandmother and other relatives decided to brave it out without power because they wanted to stay in their homes and vehicles to look after their pets.

“I’ve never had this happen before. We’ve had simple flooding in the back of our subdivision and we’ve had to sandbag before, but it wasn’t this severe,” said Quinn, who spoke to Reuters by telephone, from her job in a local restaurant.

The Bourbeuse River crested on Tuesday at an all-time record in Union, Missouri, after flooding about 25 homes, nine businesses and the city’s sewer system, Mayor Mike Livengood said.

“It will take major work to get those businesses up and running again,” Livengood told Reuters. He said no one was injured in the town of about 10,500 people in Franklin County, just southwest of St. Louis.

Missouri Governor Jay Nixon called out the National Guard to direct traffic away from hundreds of closed roads across the state and urged drivers not to drive into flooded areas. Most deaths in flooding occur when cars are swept away.

Three new flood-related deaths were discovered on Tuesday, the governor said, raising the death toll in the state since the storms began over the weekend to 13.

“These citizen soldiers will provide much-needed support to state and local first responders, many of whom have spent the last several days working around the clock responding to record rainfall and flooding,” Nixon said in a statement.

Nixon will visit Franklin County on Wednesday to tour of flood-fighting efforts in Pacific, where the Meramec River continues to rise above flood stage. The river is expected to crest on Wednesday evening more than 2 feet above the previous record set in 1982.

Across the Mississippi, in Illinois, some inmates were moved out of the Menard Correctional Center, a maximum security prison on the banks of the river, and sandbags and drinking water were prepared in anticipation of flooding in lower level cell blocks, Illinois officials said in a statement.

Ireland should get ‘epidemic under control’ before looking at foreign travel