Move comes amid criticism from animal welfare groups including Peta 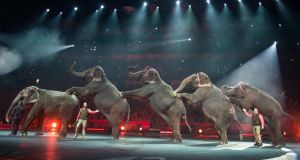 Ringling Bros and Barnum & Bailey Circus will eliminate its elephant acts – long an integral part of the spectacle billed as “the Greatest Show on Earth” – by 2018 amid ongoing criticism by animal welfare activists, the circus’ parent company said.

Feld Entertainment said the 13 Asian elephants currently used in its travelling shows will live at the company’s 200-acre (81 hectares) centre for elephant conservation in central Florida after they are retired from participating in circus acts.

“This decision was not easy, but it is in the best interest of our company, our elephants and our customers,” Kenneth Feld, chairman and chief executive of Feld Entertainment, said in a statement.

The circus has long been targeted by animal welfare groups who accused it of mistreating the elephants. Activists often appear outside circus venues handing out fliers protesting the use of elephants and showing pictures of elephants they say are abused.

Feld Entertainment fired back with a lawsuit claiming malicious prosecution, and the animal welfare groups agreed in 2012 and 2014 to pay settlements totalling about $25 million to end 14 years of litigation.

The animals represent a key symbol of the circus and have been part of its shows for a century. The circus company said it still plans to showcase tigers, lions, horses, dogs and camels in its acts.

In response to the announcement, Ingrid Newkirk, president of People for the Ethical Treatment of Animals (Peta), said the circus should not wait three years to phase out elephants from its performances.

“If the decision is serious, then the circus needs to do it NOW,” Newkirk said in a statement.