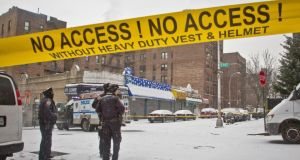 Police stand guard at a crime scene in the Bronx on Tuesday after two New York plainclothes officers were shot and injured while responding to a grocery store robbery. Three suspects are being questioned. Photograph: Bebeto Matthews/AP

The widening rift between New York City mayor Bill de Blasio and city’s rank-and-file police officers over his police reforms and response to the killings of black men by white policemen may be extending beyond officers turning their backs to him in public.

New statistics show that for the second straight week the number of arrests and summonses for minor offences and traffic and parking violations have plummeted, suggesting the slowdown in law enforcement activity may be a co-ordinated effort by officers angered at Mr De Blasio’s position on policing.

The assassination-style murders of two Brooklyn officers by a mentally ill black man last month and the mayor’s perceived alignment with protesters demonstrating against the police killing of a black man, Eric Garner, in Staten Island in July have created a full-blown political crisis for Mr De Blasio at the end of his first year in office.

At a news conference on Monday carefully choreographed to soothe relations, Mr De Blasio hailed the the NYPD as the “world’s greatest police department” but condemned the thousands of police who refused to face him during the funerals of murdered officers Rafael Ramos and Wenjian Liu as “disrespectful to the families involved”.

“I can’t understand why anyone would do such a thing in the context like that,” he said, standing next to commissioner William Bratton in a public display of support from the mayor and police chief.

Mr De Blasio noted that overall crime was down 4 per cent and that there were 332 homicides last year, down from 335 in 2013, but the focus was on the startling declines in law enforcement activity in the weeks since the bad blood between the mayor and police boiled over.

Mr Bratton put the declines down to the mass protests over police practices, the mourning of the officers and the quieter holiday season but said the department would investigate further.

Police have also exercised greater caution since the broad-daylight killings of the two beat cops.

The non-life-threatening shooting of two NYPD officers responding to a robbery call in the Bronx late on Monday have heightened concerns.

Last month Mr De Blasio’s response to a grand jury’s decision not to charge a white police officer over the choke- hold death of Garner infuriated police. He spoke in personal terms about how he and his African-American wife Chirlane McCray had warned their biracial son Dante about the “dangers that he may face” from police.

Mr De Blasio quoted the rallying cry – “black lives matter” – of demonstrators protesting against the decision not to charge another white police officer Darren Wilson over the killing of black teenager Michael Brown, leaving little doubt about which side he was on.

Relations between the progressive mayor and the powerful police department have historically been poor. The mayor ran an aggressive campaign that attacked the police department’s stop-and-frisk policy under his predecessor Michael Bloomberg on the basis that the practice was biased against black and other non- white ethnicities.

Others have gone much further. The head of the largest police union, the Patrolmen’s Benevolent Association, accused Mr De Blasio and protesters of inciting violence that led to the killing of the two Brooklyn officers.

“There’s blood on many hands tonight,” said the association’s president Pat Lynch shortly after the killings. “That blood on the hands starts on the steps of City Hall in the office of the mayor.”