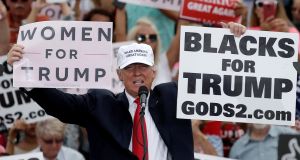 The party’s civil war, sparked by the leaked tape revealing the property mogul’s remarks from 2005, has left him trailing in the race for the White House, damaged the party’s already marginal chances of retaining the US Senate and even put the party’s large majority in the House of Representatives at risk.

Facing a backlash from Trump supporters however, several Republicans, including some seeking re-election, have fallen back in line with the New York businessman despite calling for him to step aside after the tape surfaced last Friday.

John Thune of South Dakota, the third highest-ranking Republican senator, switched position after initially calling on Mr Trump to step aside over the remarks, dismissed by Mr Trump as “locker-room talk”.

“He has a lot of work to do, I think, to win this election. But I’m certainly not going to vote for Hillary Clinton, ” he told South Dakota newspaper, the Rapid City Journal.

Senator Deb Fischer of Nebraska, despite calling on Mr Trump to step aside as the nominee last weekend, said on Tuesday that she would vote for the Republican candidate.

“I felt they were disgusting. I felt they were unacceptable, and I never said I was not voting for our Republican ticket,” she told a local radio station in her home state.

“That would be bad. I would have to consider it,” he said. He later apologised on Twitter.

A USA Today survey published on Tuesday found that one in four Republican governors, senators and congressional representatives – 87 officials in all – were refusing to endorse Mr Trump.

Since last weekend, polls have shown the Republican nominee recovering some ground among voters after his fighting performance in Sunday night’s second presidential debate.

Democrats have been making hay over the leaked Trump tape.

At a rally to support Hillary Clinton in North Carolina, US president Barack Obama said that Mr Trump would not even get a job at a 7/11 convenience store after the remarks he made. He chided Republicans for standing by him.

“Why’d it take so long for some of them to finally walk away?” Mr Obama said. “I mean, we saw this coming. He’s been saying really bad stuff for a while now.”