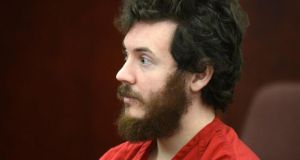 James Holmes (25) is charged with multiple counts of first-degree murder and attempted murder. He has pleaded not guilty by reason of insanity. Photograph: RJ Sangosti/Reuters

A Fox News reporter will not have to divulge the confidential sources who provided information for her story on the 2012 mass shooting at a Colorado cinema, New York’s highest court ruled yesterday, reversing two lower court rulings.

New York State’s Court of Appeals said ordering Manhattan-based reporter Jana Winter to testify in a Colorado court, where she would be asked to reveal her sources, would undermine New York’s long history of freedom of the press.

“Safeguarding the anonymity of those who provide information in confidence is perhaps the core principle of New York’s journalistic privilege, as is evident from our colonial tradition, the constitutional text and the legislative history of the Shield Law,” Judge Victoria Graffeo wrote for the court.

Fox News called the 4-3 decision a victory for journalism, while defense lawyers for accused mass murderer James Holmes feared the ruling could have dire implications for their client.

“This is a death penalty case in which the credibility of law enforcement witnesses may determine whether a man lives or dies,” said Daniel Arshack, Holmes’ attorney. “To prohibit testimony which could affect that decision simply shocks the conscience.”

Because Ms Winter lives and works in New York, the case was heard in state court in Manhattan, which ruled in Holmes’ favor, as did the mid-level appeals court. Even so, the difference in New York and Colorado state laws worked in Ms Winter’s favor yesterday. New York’s stricter shield law bars its courts from forcing a reporter to reveal confidential sources.

“Today’s ruling is a major win for all journalists,” Roger Ailes, the chairman and CEO of Fox News, said in a statement. “The protection of Jana Winter’s confidential sources was necessary for the survival of journalism and democracy as a whole.”

The case in question was the July 2012 shooting spree at a suburban Denver cinema in which 12 moviegoers were killed and dozens more injured during a midnight screening of the Batman film “The Dark Knight Rises. ”

Holmes (25) is charged with multiple counts of first-degree murder and attempted murder. He has pleaded not guilty by reason of insanity.

As part of their investigation, police took possession of a notebook Holmes had posted to a psychiatrist shortly before the shootings. The judge handling the case subsequently issued a gag order barring police and attorneys from divulging the contents of the notebook to the public.

The day the order was issued, Fox News published an online story by Ms Winter claiming the notebook was “full of details about how (Holmes) was going to kill people.” The article indicated two unnamed law enforcement officials had shared the information with Ms Winter.

Holmes’ attorneys moved to sanction the officials responsible for the leak. The 14 officials who had knowledge of the notebook’s contents all denied speaking withMs Winter, according to the Court of Appeals.

As a result, Holmes’ team sought to compel Ms Winter to testify about her sources.

Holmes’ attorneys maintained that any issues related to the exposure of confidential sources should be decided under Colorado’s shield law, which allows judges to order reporters to disclose sources if it is deemed “material and necessary.”

Ms Winter’s lawyers argued New York’s more expansive law applied and being ordered to testify would result in the end of her career as a journalist or, if she refused, her incarceration.