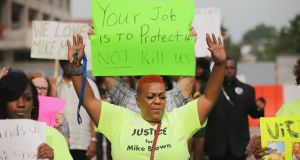 Demonstrators protest yesterday outside of the Buzz Westfall Justice Centre where a grand jury will begin looking at the circumstances surrounding the fatal police shooting of unarmed teenager Michael Brown by a Ferguson, Missouri, police officer on August 9th. Photograph: Scott Olson/Getty Images 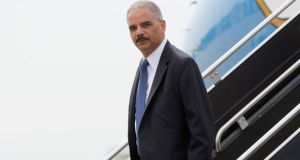 The investigation into the killing by a police officer of an unarmed Missouri teenager has been thrown into uncertainty with a tussle between the state governor and the local prosector, hours before a grand jury was due to begin hearing evidence and just as the US attorney general Eric Holder was visiting the town.

As Ferguson experienced a night of relative calm – at least compared to the violent clashes of recent nights – governor Jay Nixon and St Louis County prosecutor Bob McCulloch issued duelling statements over the investigation into the death of Michael Brown, shot dead by a Ferguson police officer on August 9th.

McCulloch, whose impartiality has been repeatedly called into question, threw down what amounted to a challenge to Nixon, saying that he would recuse himself from the inquiry into the death of Brown if the governor demanded he do.

The uncertainty hours before the arrival of Holder, and as the city experienced a relatively peaceful night despite anger over an earlier shooting by police in St Louis.

The grand jury, which will decide whether charges should be laid against Darren Wilson, the police officer who shot Brown, was due to begin hearing evidence at 9am local time yesterday. Holder’s visit is to check up on a parallel civil rights investigation, being conducted by the FBI.

The St Louis investigation has been clouded by the pressure on McCulloch, who has deep ties to law enforcement agencies. His impartiality was called into question when he criticised the decision by Nixon last week to remove the responsibility for policing the protests against the killing of Brown from the St Louis County police force. “It’s shameful what he did today, he had no legal authority to do that,” McCulloch said of the decision. “To denigrate the men and women of the county police department is shameful.”

The prosecutor’s family history has also been cited by opponents. McCulloch’s father, a police officer, was killed on duty by a black assailant – a fact his opponents have raised when accusing him of bias. – (Guardian service)