Wealthy backers of US presidential candidate Donald Trump have bought ad time in swing states in the build up to polling day. Video: Donald J. Trump for President 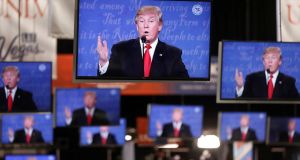 Rich Republicans may have initially balked at Donald Trump, but pro-Trump billionaires are leaving the sidelines in the last week of the election to inject cash directly into crucial counties and swing states.

Another group, the Great America Super Pac, run by wealthy diamond importer William Doddridge, bought $187,000 (€168,500) in Trump-supporting ads on the same station in the final week of the race.

Mr Mercer has not always been a major supporter of Mr Trump - his Pac originally supported Ted Cruz. But when Mr Mercer came on board, he was a major force, helping to elevate Steve Bannon of conservative website Breitbart within the Trump campaign.

Mr Doddridge, by contrast, has been pro-Trump from the beginning. The last minute ad spend comes as other Republican donors have remained notably quiet.

Oil billionaires the Koch brothers, whose financial contributions have underwritten Republican bids for decades, have largely stayed out of the race, spending only to help candidates further down-ballot.

Hillary Clinton’s foothold in Florida appeared to slip in the wake of Trump’s high-volume ad buys, though a renewed push from her the week before the election came to an end that left the candidates neck-and-neck.

The most visible Super Pac supporting Ms Clinton is Priorities USA, which is backed by George Soros and Hyatt Hotels co-founder Jay Pritzker, among others.

Another Pac called ISS-America Thrives has appeared seemingly out of nowhere to purchase ad time in bulk in the last days of the election, presumably on behalf of Ms Clinton.

The organisation spent $12,665 (€11,410) to saturate a single CBS affiliate in hotly contested Sandusky County, Ohio with ads for two days: the Monday before the election, and election day itself.

But despite this last minute splurge, ad spending is likely to be down overall during an election season with two of the most unpopular presidential candidates in history, said Pivotal Research analyst Brian Wieser.

The drop is largely down to the Trump campaign’s decision to rely on free publicity from the media and social media to promote Mr Trump.

During election season, many TV stations, especially in swing states, make the money they will use to fund their operations and equipment upgrades during the following less-political years.

Stations add staff, give raises and purchase state-of-the art screens and weather radar for use in the off-season.

1 Murdered and mutilated: Keane Mulready-Woods and the teenagers of gangland
2 Cork student fatally stabbed in the neck at house party named
3 Who was murdered teenager Keane Mulready-Woods?
4 Thousands of teachers to strike on February 4th
5 Leaving Cert marks are altered as part of ‘unwritten policy’, claim examiners
Real news has value SUBSCRIBE