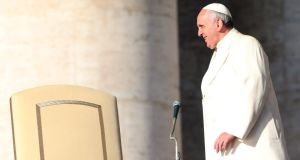 Pope Francis has not yet visited Cuba but both of his two immediate predecessor made trips to the island. Photograph: Franco Origlia/Getty Images

The Vatican leveraged its good relations with Cuba and the United States to help broker their historic resumption of ties and the deal was spurred by letters from Pope Francis to the presidents of both countries.

The Vatican, which facilitated the agreement along with Canada, gave some details of its role in a statement shortly after US President Barack Obama announced the major policy shift by Washington to resume diplomatic ties after decades of hostility with the communist-ruled island.

The pope wrote letters to Obama and Cuban President Raul Castro in recent months, “and invited them to resolve humanitarian questions of common interest including the situation of certain prisoners, in order to initiate a new phase in relations between the two parties,” the statement said.

It disclosed that a meeting took place in the Vatican in October between delegations of the two countries “to facilitate a constructive dialogue on delicate matters, resulting in solutions acceptable to both parties”.

Washington had for years been asking the Vatican to help win the release of imprisoned American aid worker Alan Gross. US Secretary of State John Kerry made requests during meetings this year with Vatican secretary of state Cardinal Pietro Parolin.

“There has not been one time when the Americans have come here that they have not asked us for help with the release of Alan Gross,” a senior Vatican official close to the situation told Reuters.

“We have made, many, many interventions (with the Cubans) on this,” he said. “The Vatican has been involved in mediation for some time and developments came after recent interventions from the Vatican,” he added. He declined to give details.

In March, Mr Obama discussed Cuba, which is a predominantly Catholic country, with the pope during his visit to the Vatican and has continued to work with the Holy See during the process, an administration official said.

Pope Francis was aware that Mr Obama was considering a change in policy toward Cuba and reached out to the president, the official said, noting that the personal appeal was a rare occurrence that lent greater momentum to the negotiations.

Kenneth Hackett, US ambassador to the Vatican, said in a statement issued in Rome that he was grateful for the “key role” the Vatican played in the negotiations.

In his address, Mr Obama thanked Pope Francis, the first Latin American pope, for his “moral example,” as well as Canada for hosting some of the discussions.

Pope Francis, in turn, issued a statement congratulating Cuba and the United States on their decision to establish diplomatic relations.

The pope has not yet visited Cuba but both of his two immediate predecessor made trips to the island. John Paul visited in 1997 and Benedict visited in 2012. Both met with the island’s historic revolutionary leader, Fidel Castro.

Pope John Paul’s visit led to some relaxations of government restrictions on the Church, including reinstating Christmas as a national holiday.