Pleas for calm endeavour to rise above chants 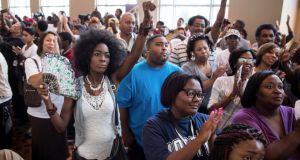 Ali Delan joins a capacity crowd that spilled outside at the Greater Grace Church during a rally for Michael Brown (18), the unarmed black man who was fatally shot by a white police officer last week. Photograph: Whitney Curtis/The New York Times

The scattered clashes and violence had flared on the first morning of a curfew in this troubled city. But as Sunday drew on, pastors, the police and civil rights figures joined parishioners in churches, all trying to tamp down the anger that has followed the fatal shooting of an 18-year-old unarmed black man.

In a packed sanctuary at Greater Grace Church, not far from the site of evening demonstrations, Capt Ronald S Johnson, the Missouri State Highway Patrol captain brought in by the governor to take over security, spoke with the cadence of a preacher as he apologised to the family of the teenager, Michael Brown.

“My heart goes out to you and I say that I’m sorry,” Johnson said. “I wear this uniform, and I should stand up here and say that I’m sorry.” Before a mostly black audience, Johnson, who is African-American, spoke of his own “black son, who wears his pants saggy, wears his hat cocked to the side and has tattoos on his arms.”

“That’s my baby,” he added. “Michael’s going to make it better for our sons so they can be better black men,” predicting that the treatment of black youths here would somehow change. “We need to pray. We need to thank Michael for his life and we need to thank him for the change that he is going to make.”

Time and again, Johnson won applause. But in a vivid display of the challenges faced by the authorities in this tumultuous city of 21,000 that has become the centre of a national debate about race and policing, a large crowd outside the church continued to protest the circumstances of Brown’s death.

The shooting of the teenager on August 9th by a white officer, Darren Wilson, is the subject of inquiries by the FBI and the St Louis County police.

Several demonstrators held signs reading “Stop racist police killing”, while many others joined in the chant that has echoed through this city’s streets for days: “Hands up! Don’t shoot!”

Hours earlier, just after a midnight curfew went into effect, police dressed in riot gear and driving heavily armoured vehicles engaged in a new clash with angry demonstrators. One person threw a bottle rocket that lit the street ablaze and left a lingering scent of petrol. Before long, a police caravan with lights flashing began rolling slowly toward the protesters. “You are violating the state-imposed curfew,” an officer said over a loudspeaker. “You must disperse immediately or you’ll be subject to arrest and/or other actions.”

The crowd did not back down, cheering louder. Eventually a canister of tear gas was lobbed into the crowd. Smoke filled the air. Some people ran away from the police. Bottles crashed on to the pavement.

Johnson said the heavy police response had been prompted by reports of armed people at a barbecue restaurant. Someone also had fired a gun toward a police car, he added. Seven people were arrested and accused of failing to disperse and one man was critically wounded in an overnight shooting, apparently by another protester. The authorities said the police had not opened fire and were investigating.

Officials extended the curfew, which runs from midnight until 5am, for another night and said they would decide each day whether to continue its enforcement.

In churches, the calls for calm continued. At the Greater St Mark family church in Ferguson, state attorney general Chris Koster said he came to pray and grieve with the mostly African-American parishioners. “You have lost a member of your community at the hands of a member of my community,” he said. “Not just the Caucasian community, but the law-enforcement community, and that is painful to every good-hearted person in this city.”

He said he feared that the armoured vehicle the police used on West Florissant Avenue, the scene of daily demonstrations since Brown was killed, was a symbol of the armour that had grown over time between the black community and law enforcement.

“This week is a 50-year flood of anger that has broken loose in this city, the likes of which we have not seen since Dr King was killed,” he said, referring to the Rev Martin Luther King jnr, “and I am sorry that I have not done more from the law-enforcement community to break down that wall of anger, that wall of armour.”

At the Sunday morning service at New Jerusalem Missionary Baptist Church, about 40 people gathered. On a screen hanging above the pulpit, Jaquan Vassel (24), the church deacon, played a video he had seen the night before on his Facebook news feed. In it, two black men were reading from the book of Psalms during a protest on West Florissant Avenue.

“I commend them for trying to look to God,” Vassel told the congregants, “but you hear the anger in their voices. They are angry at the police officers. We have to show them how to forgive, just like God forgave us.”

Forgiveness was also emphasised by Alonso Adams jnr, the assistant pastor of the church, who spoke after Vassel. “How many of us have killed people with our lips?” he asked. “How many brothers and sisters, white or black, have we defamed with our words?”

Adams acknowledged the anger toward the police force, in particular toward Wilson. But, he added,“if he came into this church this morning and asked Jerusalem to forgive him, how many of you would offer up your arms?”

Later at Greater Grace Church, where cars were lined up for at least a mile, the Rev Al Sharpton called the killing of Brown “a defining moment on how this country deals with policing and the rights of its citizens to address how police behave in this country.”

Sharpton recalled Marlene Pinnock, a black woman who was assaulted by an officer in Los Angeles this summer; Eric Garner, a black man in Staten Island who was put in a chokehold by an officer and who later died, and the death of Brown, saying, “We have had enough.”

One woman in the crowd raised a handwritten sign that equated the city Ferguson Police Department with the Ku Klux Klan. Sharpton admonished the crowd not to loot in Brown’s name. “We are not looters,” he said, “we are liberators.” – (New York Times service)