Democratic filibuster brings compromise from Republicans as Trump weighs in 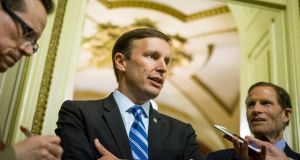 Democratic senator Chris Murphy speaks to reporters after waging an almost 15-hour filibuster on the US Senate floor in order to force a vote on gun control. Photograph: Pete Marovich/Getty Images

The massacre at a Florida nightclub has given fresh impetus to seek legislation that would prevent suspected terrorists buying weapons and expanding background checks on people buying guns.

Democrats in the US Senate ended a filibuster of non-stop speeches lasting 14 hours and 50 minutes in the early hours of Thursday when Republican leaders reportedly agreed to allow two proposed gun measures to go to a vote.

Senator Chris Murphy, a Democrat from Connecticut who led the congressional manoeuvre, claimed a compromise had been reached with political rivals.

The senate will vote on banning people on the government terrorist “no fly” watch list from obtaining gun licences and universal background checks to cover purchases at gun shops and online – two measures pushed by President Barack Obama but long resisted by Republicans.

“I’m prepared to stand on this floor and talk about the need for this body to come together on keeping terrorists away from getting guns . . . for, frankly, as long as I can, because I know that we can come together on this issue,” Mr Murphy said at the start of his speech.

More than 30 Democrat senators joined the Connecticut senator on the floor, angrily telling stories of mass shootings in their own states and urging action.

The first-term senator is a long-time advocate of gun control. His home state saw one of the worst gun attacks with the murder of 20 school children and six adults at Sandy Hook primary school in Newtown by a lone gunman. Democratic-led efforts to pass gun-control measures in the aftermath of that tragedy failed.

Mr Murphy evoked the Sandy Hook killings in emotional terms during his speech. “I can’t tell you how hard it is to look into the eyes of the families of those little boys and girls who were killed in Sandy Hook and tell them that, almost four years later, we’ve done nothing, nothing at all,” he said.

In the aftermath of the Pulse nightclub attack Democrats have found an unlikely ally in the presumptive Republican presidential candidate Donald Trump in pushing for the “no fly, no buy” bill to keep guns out of the hands of people on the terror watchlist.

“I will be meeting with the NRA, who has endorsed me, about not allowing people on the terrorist watch list, or the no fly list, to buy guns,” Mr Trump tweeted on Wednesday.

Republicans have long objected to the legislation, echoing the concerns of the NRA that the regulations would weakened constitutional protections under the Second Amendment “right to bear arms” by blocking gun sales to people listed on the terror list by mistake.

“Welcome to the cause,” the presumptive Democratic presidential nominee Hillary Clinton said, mocking Mr Trump for backing a measure she had pushed “for a long time”.