Orlando gunman may have scouted Disney properties as targets 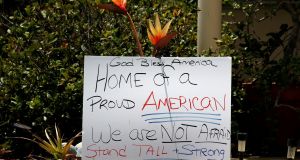 A sign in front of a house across the street from Omar Mateen’s home in Port Saint Lucie, Florida, US. Photograph: Carlo Allegri/Reuters

The gunman behind the Orlando gay nightclub attack is reported to have visited a number of properties in the nearby Disney World in recent months, including a shopping centre in the theme-park resort.

FBI investigators suspect that Omar Mateen (29) was scouting the Disney properties as potential targets for his attack when he visited them in April and again in the early part of this month because his recent visits coincided with Gay Days, an annual event that brings to LGBT tourists to Orlando.

He was spotted in Disney Springs, an outdoor shopping and entertainment centre that forms part of the Disney World resort.

The visits in early June took place around the same time that Mateen purchased two high-powered weapons, an AR15 assault rifle and a semiautomatic handgun. He also tried unsuccessfully to buy body armour.

Mateen is said to have had an aversion towards gay men, expressing outrage at the sight of two men kissing during a recent trip to Miami, according to his father Seddique Mir Mateen.

Speaking to reporters at his home in Port St Lucie, about two hours south of Orlando, Mr Mateen denied that his son was gay.

Responding to reports that his son’s wife drove him to scout locations, Mr Mateen said that he did not think that his daughter-in-law was an accomplice to the attack.

The New York-born security guard entered the club at 2am and opened fire while more than 300 patrons enjoyed a Latin-themed night.

His killing spree lasted three hours and ended when police fearing the “further loss of life was imminent” launched an assault at around 5am and killed him.

Angel Santiago (32), one of the survivors being treated in hospital for his injuries, told reporters that he hid under a sink in a bathroom at the club when the shooting began.