What has the Oregon stand-off got to do with previous armed sieges? 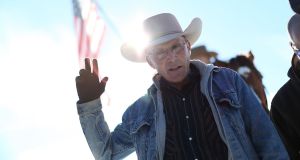 Lavoy Finicum who was one of the occupiers of the Malheur National Wildlife Refuge in Oregon: he was shot dead. Photograph: by Joe Raedle/Getty Images

There was a dramatic turning point in the four-week armed occupation of a wildlife refuge in Oregon on Tuesday when the FBI arrested eight leaders of the occupation and shot dead one militia member.

The stand-off began on January 2nd, when a rancher from Nevada, Ammon Bundy, led an armed militia to seize control of the Malheur National Wildlife Refuge, in protest at federal control of land in the American west. Since then, federal authorities have taken a cautious approach to the occupation, until making their move as Bundy and other militia leaders drove to a nearby town for a community meeting. After his arrest, Bundy told the rest of the occupiers still at the refuge to stand down, though some remain in place.

Accounts differ about the shooting of Robert “LaVoy” Finicum (54), with the Bundy family claiming: “Our government murdered him while he was unarmed with his hands in the air”; whereas another militia member claimed Finicum had charged at federal agents before they shot him.

Given that the occupation comes against the backdrop of the ongoing crisis of black deaths at the hands of law enforcement officers across the US, the restraint shown by federal authorities up to now has been pronounced.

That restraint, and the extremist anti-government sentiment that fuelled the occupation, are shaped by earlier flashpoints at Ruby Ridge, Idaho, in 1992, and Waco, Texas, in 1993.

Both incidents remain touchstones for the extremist right-wing armed militia movement in the US. In Waco, the notorious botched raid of the Branch Davidian cult after a 51-day stand-off led to the deaths of 76 people, many of them children. Despite rightwing conspiracy theories, the allegations of child abuse by cult leader David Koresh meant the case for intervention was overwhelming.

The pretext for the Ruby Ridge siege was less obvious – Randy Weaver and his family had moved to a remote cabin in the Idaho woods, apparently out of a fear of the impending apocalypse. Weaver’s involvement with white supremacy groups led him to the attention of federal agents, who tried to entrap him on gun charges.

Weaver retreated to his cabin, which eventually led to an 11-day siege in which his wife and 14-year-old son were shot and killed. The three surviving Weaver daughters received $1 million each in compensation from the US government.

It is clear that the persistent fantasy on the militant right that the US government is a totalitarian regime intent on oppressing their constitutional freedoms does not have much evidence to back it up, hence the symbolic importance of Waco and Ruby Ridge.

Indeed, the actions of the Oregon militia men can be seen as an attempt to provoke exactly the sort of “tyrannical” response that justifies their extremism in the first place.

Whether the Oregon occupation will join Ruby Ridge and Waco as a rallying point for anti-government extremists only time will tell. But in the wake of Finicum’s death, his family released a statement: “Please keep praying and keep using your voice to get the truth out. This fight against tyranny is not over.”