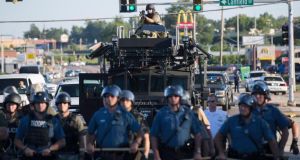 Riot police stand on guard as demonstrators protest against the shooting dead of teenager Michael Brown in Ferguson, Missouri, on Wednesday. A witness in the case told local media that Brown had raised his arms to police to show that he was unarmed before being killed. Photograph: Mario Anzuoni/Reuters

The police officer who fatally shot an unarmed black teenager in Ferguson, Missouri has been named as Darren Wilson.

Speaking at a press conference outside the QuikTrip convenience store that was the site of looting on Saturday night, Ferguson police chief Thomas Jackson told reporters that 18-year-old Michael Brown was shot and killed by officer Darren Wilson.

Ferguson police had initially planned to release Wilson’s name earlier in the week, then delayed doing so because of what they said were death threats posted on social media.

American president Barack Obama said yesterday there was “no excuse for police to use excessive force”, after a fourth night of confrontation in Ferguson, Missouri, over the death of an unarmed teenager, Michael Brown.

“We lost a young man in heartbreaking and tragic circumstances,” Mr Obama said of Brown, who was shot dead by police on Saturday. “He was 18 years old and his family will never hold Michael in their arms again.”

Appealing for calm, he said: “Now’s the time for healing, now’s the time for peace and calm on the streets of Ferguson.” He also condemned the arrest of reporters. “Here in the United States of America, police should not be bullying or arresting journalists who are just trying to do their jobs.”

Mr Obama’s comments came a fourth night of confrontation in Ferguson, where residents of the majority black town of 21,000 people have been protesting against the killing of Brown by an officer from the overwhelmingly white police force.

The governor of Missouri, Jay Nixon, was due to make a statement about the police response yesterday, amid speculation that he was to removed the St Louis police department from the lead role in responding to the protests.

“The worsening situation in Ferguson is deeply troubling,” said Nixon on Wednesday evening. “While we all respect the solemn responsibility of our law enforcement officers to protect the public, we must also safeguard the rights of Missourians to peaceably assemble, and the rights of the press to report on matters of public concern.”

He urged law enforcement agencies to “keep the peace and respect the rights of residents and the press”.

The senior US senator for Missouri, Claire McCaskill, said she had been working to “demilitarise” the situation. She said yesterday: “This kind of response by the police has become the problem instead of the solution. I obviously respect law enforcement’s work to provide public safety, but my constituents are allowed to have peaceful protests, and the police need to respect that right and protect that right. Today is going to be a new start – we can and need to do better.”

On Wednesday night, dozens of officers, some carrying assault rifles, advanced with a pair of armoured trucks on the young and predominantly African American crowd in Ferguson, after two glass bottles were thrown at their lines from a largely peaceful protest.

For hours, police snipers trained their weapons on demonstrators who protested with their hands up as an emblem of peaceful protest. Protesters described being subjected to military-style tactics as they fled through gas-filled residential side-streets.– (Guardian service)