Bidding for rights to two books reaches $60m, a record for US presidential memoirs 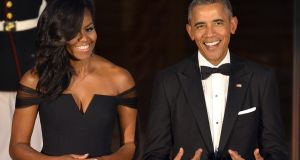 Penguin Random House has landed a deal to publish two forthcoming books by former US President Barack Obama and the former first lady, Michelle Obama, with one volume to be written by each, the publishing company said on Tuesday.

Terms of the agreement, in which Penguin Random House acquired worldwide publication rights for the two books, were not disclosed.

In keeping with their past practice, the Obamas plan to donate a “significant portion of their author proceeds to charity,” including the Obama Foundation, the publisher said in a statement.

The deal followed a heated auction for global rights to the two books with bidding that reached more than $60 million, a record sum for US presidential memoirs, the Financial Times reported, citing people with knowledge of the sales process.

By comparison, fellow Democrat and former President Bill Clinton earned $15 million for rights to his 2004 memoir “My Life” after he left office, while Obama’s immediate predecessor, Republican George W. Bush, reaped some $10 million from his book “Decision Points,” according to the Financial Times. Those books were published by Penguin Random House division Knopf and by Crown, respectively.

Penguin Random House also published Obama’s three previous books - “Dreams of My Father,” “The Audacity of Hope,” “Of Thee I Sing: A Letter to My Daughters.”

The company did not disclose the subject matter of the two forthcoming books, or a time frame for them to be published, but they will presumably cover Obama’s time in the White House as the first African-American US president.

Among other publishers that bid on Obama deal were HarperCollins, a unit of News Corp, and Simon & Schuster, owned by CBS Corp, the Financial Times said.