Obama needs people on side for attack on Islamic State militants

America Letter: president will need to win over Congress as he steps up fight 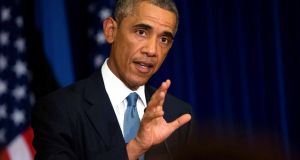 The words “Obama” and “gaffe” rarely appear together. The US president’s statements are carefully crafted, his words precisely chosen. He is as polished a performer as anyone who has stood at a White House podium.

When it comes to verbal slips in his administration, the foot and mouth usually belong to vice-president Joe Biden.

So when President Obama admitted on August 28th that the US “don’t have a strategy yet” on dealing with jihadist fighters, the Islamic State in Iraq and Syria, most assumed that this wasn’t a slip of the tongue; Obama was, in a moment of candour, revealing a private truth.

The White House moved quickly to clarify that Obama was not suggesting that the administration didn’t have an overall strategy for dealing with IS.

Press secretary Josh Earnest took to Twitter to say that the comprehensive strategy to tackle the fighters in Iraq and Syria involved strong regional partners and pressing the Shia-led Iraqi government to be more inclusive of the minority Sunnis.

Obama didn’t address the ambiguity himself until this week, six days later,

at a news conference on Wednesday in Estonia. Even then his message on IS seemed confused. At one point, he said that the goal was to “degrade and destroy” the fighters and later that the objective was to ensure the group was “manageable”.

This was also at odds with comments by other senior figures in his government and noted by CNN and other US commentators this week who highlighted the Obama administration’s mixed messages.

Biden, showing his teeth in a speech on the New Hampshire-Maine border on Wednesday, said of IS: “We will follow them to the gates of hell until they are brought to justice – because hell is where they will reside.” (Jim Foley, one of the two US journalists beheaded by IS, was from New Hampshire. )

Obama’s “no strategy yet” comment came in reply to a question about whether he needed Congressional approval to attack IS in Syria. He explained he wasn’t going ask Congress for permission to do something when he hadn’t decided what that something would involve. His response was unclear because his plan is not yet clear.

The complexities around Congressional oversight of the executive branch of the US government vis-a-vis military action may in part explain his unscripted, off-message words.

A year ago the president decided to defer military strikes against Syria over chemical-weapons use in order to seek Congressional approval first.

“I believe our democracy is stronger when the president acts with the support of Congress,” he said.

Over the summer Obama authorised the first US combat operations in Iraq since the war ended in 2011. He has deployed 1,100 troops to Iraq to stop the advance of IS, including 350 on Tuesday to guard Americans and US facilities in Baghdad. From early August until Thursday night, the US had conducted 127 air strikes against IS in Iraq.

None of this has been approved by Congress. Obama is using authority available to him under the War Powers Act, a law that was passed in 1973 by a Congress unhappy with the Vietnam War and Richard Nixon, who wanted greater oversight in the waging of a war.

On August 8th, in his first letter to Congress noting his authorisation to take military action against IS in Iraq, Obama – in addition to the War Powers Act – cited his authority under Article 2 of the US constitution, though this commander-in-chief clause is considered vague by legal scholars when it comes to bestowing powers on a president to wage military operations.

Under the War Powers Act, there is a 60-day limit on specific military action so the president has until October 7th to find other authorisation if he is to continue striking IS, or seek Congressional approval for the use of force in Iraq and, if he so chooses, Syria.

Technically, Obama can legally take action in Iraq under the 2002 Authorisation for Use of Military Force against Iraq Resolution that was used to green-light George W Bush’s 2003 war, except that

early this year the Obama administration said that this Act was “no longer used” and called on Congress to repeal it.

Referring to the Act in May 2013, Obama said that unless the US disciplined its definitions and actions, then it “may be drawn into wars we don’t need to fight, or continue to grant presidents unbound powers more suited for traditional armed conflicts between nation states”.

As a law professor elected on an anti-war manifesto, Obama must choose his powers and words carefully if he is to escalate the fight against IS. If it involves Syria, based on his pledge last year, he will have to win over a divided Congress.

Selling that to lawmakers in an election year will require a delicately crafted argument.