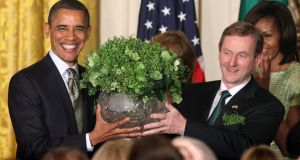 US president Barack Obama said that the achievement of the many Irish in America was another reason why his administration needed “to build an immigration system for the 21st century.”

Speaking at Washington’s official St Patrick’s Day shamrock ceremony last night, the president said the Irish were an example of why the US required a new immigration system that “works for families and businesses and our economy.”

The president wants to overhaul US immigration laws to put the 11 million illegal immigrants, including an estimated 50,000 Irish in the US, on the path to citizenship and create opportunities for new immigrants to secure work legally.

“Looking out on this room, it’s clear just how much America owes to our brothers and sisters from across the Atlantic, and how many of us, myself included, wouldn’t be here if it were not for the brave souls who set for the New World with no earthly idea of what awaited them on the other side,” he said.

Taoiseach Enda Kenny gave the traditional gift of shamrock in a custom-made crystal bowl to the US president, Mr Obama’s fifth annual St Patrick’s Day reception in the East Room of the White House. Mr Kenny said that Sean Egan, who was unemployed four years ago, had spent 300 hours making the bowl.

Mr Kenny referred to Ireland’s economic troubles, a frequent theme so far during his week-long visit to the US to mark St Patrick’s Day. “We’ve still a long way to go,” said the Taoiseach.

His speech to the reception touched on a variety of subjects ranging from the international space station and Twitter to James Joyce and the Famine.

The president joked that the next four years are “shaping up to be very green ones here in the White House.” He said that his new chief of staff, national security adviser, CIA director and new head speech-writer were all Irish “and Joe Biden has very kindly agreed to stay on as Irishman-in-Chief,” he said.

Mr Obama praised the help shown by the Irish to help the residents of Breezy Point in New York, one of the worst areas hit by Hurricane Sandy last year.

“New York has been very good to the Irish; now the Irish are giving back to New York,” he said.

“And that’s the story of America and Ireland: we look out for each other, we have each other’s backs and we recognize that no challenge is too great and no obstacle is too high if you’ve got a friend beside you and a nation behind you. That’s been our history; that will be our future.”

The party-goers enjoyed Irish smoked salmon, pork belly with Bushmill glaze and potato boxty with baby kale along with entertainment from Paddy Moloney of the Chieftains traditional Irish group.

Later, the Taoiseach attended a reception hosted by the Ambassador in a hotel in Washington.

This was followed by private dinner where his guests included US Supreme Court chief justice John Roberts and Republican Paul Ryan, the Irish-American congressman from Wisconsin and Mitt Romney’s running mate in last year’s presidential election.

US vice-president Joe Biden will host Mr Kenny at his traditional St Patrick’s Day breakfast at his residence at the Naval Observatory in Washington today.

The Taoiseach’s US trip will continue later today when he departs Washington for the west coast stopping at Los Angeles, Silicon Valley and Seattle.