Nun convicted over break-in at US nuclear plant 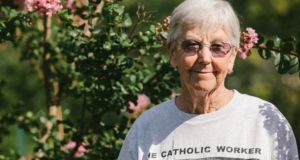 The contractor-run facility was built after the September 11, 2001, al-Qaeda attacks on New York and Washington, and was once touted as “the Fort Knox of uranium” because of its security features.

A federal jury has convicted an elderly nun and two other peace activists for damage they caused in breaking into a defence facility where enriched uranium for nuclear bombs is stored.

Sister Megan Rice, who was 82 at the time of the incident, Michael Walli and Greg Boertje-Obed admitted cutting fences and making their way across the Y-12 National Security Complex in Oak Ridge, Tennessee, in July 2012, embarrassing US officials and prompting security changes.

Jurors deliberated for about 2-1/2 hours before rendering the verdict in Knoxville federal court. Rice stood straight up and smiled when it was read. Supporters of the three gasped and some began to cry before singing a hymn as the judge left the courtroom.

All three were convicted of damaging a national defence premises under the sabotage act, which carries a prison sentence of up to 20 years, and of causing more than $1,000 of damage to US government property, which is punishable by up to 10 years in prison.

A detention hearing is scheduled for 9am (1pm Irish time) today before US District Court Judge Amul Thapar.

“These are people of conscious, nonviolence and justice. And they certainly put the US government to shame,” Paul Magno, a supporter of the activists and member of the group Plowshares, said afterward.

Prosecutors contended that the break-in at Y-12, the primary US site for processing and storage of enriched uranium, disrupted operations, endangered US national security, and caused physical damage that cost more than $8,500 to repair.

“We are a nation of laws. You can’t take the law into your own hands and force your views on other people,” Assistant US Attorney Jeffrey Theodore had said in a closing argument that called the facility “a critical part of our national defence.”

The activists admitted cutting several fences, walking through the complex for hours, spray-painting slogans and hammering on the walls of the facility. When guard Kirk Garland confronted them, they offered him food and began singing.

Defence attorneys said the activists, who belong to a group called Transform Now Plowshares, had taken part in a symbolic break-in that did not harm the facility. They had no intent to harm the facility and the damage cost was overstated, they said.

“Our country is not threatened by three people who get senior discounts walking onto their (base),” Walli’s attorney, William Quigley, told jurors in a closing argument yesterday.

In closing, Boertje-Obed said the defendants had “exposed that the emperor does not have real security. Nuclear weapons do not provide security ... our actions were providing real security and exposing false security.”

He had testified yesterday that it was “a miracle” that the activists could walk from a church parking lot over a ridge and reach the building deep inside the facility grounds.

Janice Sevre-Duszynska, a member of the Association of Roman Catholic Women Priests who attended the trial to support Rice, said the activists were “challenging unjust, inhumane and immoral behavior filled with insatiable insecurity and greed.”

“My hope is that the people wake up to the freedoms being taken away in the name of so-called security as well as to the egregious waste of their hard-earned taxpayers’ money,” she said in a statement.

The breach sparked investigations by the US Congress and the Energy Department, which oversees nuclear facilities. An Energy Department inspector general report in August found “troubling displays of ineptitude” at the complex.

Shortly after the incident, the top security official at the National Nuclear Security Agency and two other federal officials were reassigned. Also, top officials at WSI, the international security company that provided security at Oak Ridge, were removed and officers were fired, demoted or suspended.

1 Lithuanian man given until midnight on Saturday to leave Ireland
2 Coronavirus in Europe: Two dead in Italy as fears grow that attempts to contain illness are failing
3 Ryanair’s Michael O’Leary under fire for comments on Muslim men
4 Archbishop: Sex abuse of women by L’Arche founder ‘reprehensible’
5 The view from Clondalkin: If Sinn Féin don’t get in, ‘there will be marches’
Real news has value SUBSCRIBE