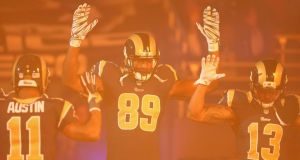 St Louis Rams players hold their hands in the air in a gesture of solidarity with protesters over the shooting of black teenager Michael Brown. Photograph: Dilip Vishwanat/Getty Images

The repercussions from last week’s grand jury decision not to charge a white police officer over the August 9th shooting of an unarmed black teenager in Ferguson, Missouri, have spilled into professional sport in the United States.

A dispute erupted between the St Louis Rams American football team and police over whether the team had apologised for a group of players walking onto the field before a game on Sunday holding their hands in the air in a gesture of solidarity with protesters.

Kevin Demoff, the executive vice president of football operations for the Rams, denied that he apologised to St Louis County police chief Jon Belmar in a phone call for five players copying the “Hands Up Don’t Shoot” sign that has become synonymous with demonstrators protesting against the shooting dead of teenager Michael Brown.

The gesture was a reference to the accounts of some eye-witnesses who said Mr Brown had his hands in the air when shot. The decision of a grand jury not to indict police officer Darren Wilson (28) over the fatal shooting of Mr Brown (18) on a Ferguson street has triggered renewed violence in the troubled suburb of St Louis and protests in major cities across the US.

Mr Demoff said he contacted police about the players’ actions but said that his comments did not amount to an apology. “In those conversations, I expressed regret that players’ actions were construed negatively against law enforcement,” he told sports website ESPN.

“At no time . . . did I apologise for the actions of our players. [The Rams] do believe it is possible to support both our players’ First Amendment rights and the efforts of local law enforcement to make this a better community.”

The war of words began after Mr Belmar emailed staff saying he had received an apology. St Louis police issued a follow-up statement to Mr Demoff’s remarks, saying that Mr Belmar took his call to be an apology.

The Obama administration has promised changes to law enforcement to tackle what protesters claim is endemic racial profiling by white police officers of African-Americans and other minorities.

Attorney general Eric Holder said in a speech at Martin Luther King Jr’s church in Atlanta on Monday night that he would announce in the coming days “rigorous new standards and robust safeguards to help end racial profiling once and for all”.

A group of protesters interrupted Mr Holder’s speech at the Ebenezer Baptist Church before they were escorted outside where they chanted: “No justice, no peace” and “we have nothing to lose but our chains”.

The attorney general, the country’s most senior law enforcement official, said they should not be condemned for protesting.

After a series of meetings at the White House to discuss the unrest, US president Barack Obama promised to improve relations between police and communities during his last two years in office. Acknowledging failures by past task forces set up to tackle the problem, he said: “This time will be different because the president of the United States is deeply vested in making it different.”