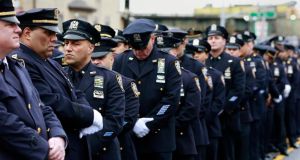 New York mayor Bill de Blasio appealed for reconciliation in his eulogy for the second of two police officers murdered last month, two deaths that led to accusations the mayor had contributed to an anti-police climate.

Politicians, police officials and other mourners joined family members inside a Brooklyn funeral home to honour Wenjian Liu, believed to be the New York Police Department’s first Chinese-American officer killed in the line of duty.

Outside, a sea of blue-uniformed police officers stood in silence. About three dozen of them could be seen turning their backs on the mayor when his image appeared on screens outside, disregarding an entreaty by police commissioner Bill Bratton not to make any gesture of disdain. Mr Liu (32) and his partner Rafael Ramos were ambushed on December 20th by a killer who said he wanted to avenge the deaths of two unarmed black men this summer at the hands of white officers.

Caiyao Chen (32), who moved to the US from China in 2000, was among a crowd of mostly Asian mourners who pressed against barricades on the sidewalk outside the services.

Mr Chen didn’t know Mr Liu, who was married two months ago, but he said he was saddened because the officer was his parents’ only son. “In Chinese tradition, the son carries the blood of the family,” he said.

Most of the officers outside the home faced the mayor when he spoke. At last week’s funeral for Mr Liu’s partner, thousands turned their backs when Mr de Blasio began his eulogy.

Even so, the silent protests outside the funerals highlight how much the relations between the police force and Mr de Blasio have deteriorated since the murders.

Immediately after the ambush, Patrick Lynch, the head of the largest police union, said the mayor had contributed to the political climate that led to the killings, saying there was “blood on many hands”.

It is the latest turn in a national debate over racial relations and law enforcement that was rekindled this summer by the deaths of unarmed black men in Ferguson, Missouri, and New York City in encounters with white officers.

Relations between the police and Mr de Blasio had begun to fray before that. During his 2013 campaign for office, the mayor had criticised some of the NYPD’s tactics, including a “stop-and-frisk” policy that critics said was used to harass African-Americans and other minority groups.

Before the funeral, rep Peter T King of Long Island said he thought it was possible the mayor and the rank and file police have reached a turning point that could lead to reconciliation. “The fact that the city did come together for the funeral does give the mayor an opportunity to work with the police to go forward together,” he said. “He has to find a way to make this work.”–(Reuters)