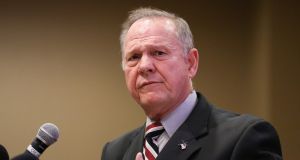 Roy Moore: candidacy promises to deepen divide between Republican leaders in Congress and the populist wing of the party. Photograph: Marvin Gentry/Reuters

Senator Mitch McConnell, the Republican leader, said on Monday that Roy Moore, the Republican Senate candidate in Alabama, “should step aside” and that he believes the women who have accused Mr Moore of sexual misconduct when they were teenagers.

“I believe the women, yes,” Mr McConnell said at a news conference in Louisville, Kentucky. Mr McConnell also said that encouraging a write-in candidate (a candidate who would not appear on the ballot paper, but who could be written in by voters) to run in the December 12th special election is “an option we’re looking at”.

Mr Moore (70), a judge who was twice removed from the state’s high court, first for refusing to remove the Ten Commandments from the supreme court grounds, then for refusing to accept same-sex marriage, responded defiantly. He showed no sign of leaving the race before Alabama’s December 12th special election date.

Republicans in Washington and Alabama have been up in arms over the accusations, published last week in the Washington Post, that Mr Moore pursued sexual or romantic relationships with teenagers when he was in his 30s. The reports have upended a race in a state that has not elected a Democratic senator in 20 years.

And the issue shows no sign of abating. On Monday, New York lawyer Gloria Allred, who has made her name by championing victims of sexual harassment, was expected to publicly introduce a new woman accusing Mr Moore of sexual impropriety. “The new accuser wishes to state what she alleges Roy Moore did to her without her consent,” a news release from Ms Allred said.

But with Mr McConnell now firmly against his election, Mr Moore and his candidacy promise to deepen the divide between Republican leaders in Congress and the populist wing of the party that is standing by the Alabamian.

In a fundraising appeal, Mr Moore reached out to his supporters with the subject line: “Mitch McConnell’s plot to destroy me.” “Apparently Mitch McConnell and the establishment GOP would rather elect a radical pro-abortion Democrat than a conservative Christian,” he continued.

For their part, Democrats have begun raising money in earnest for the Democratic candidate, Doug Jones, a former prosecutor who sent Ku Klux Klansmen to jail for the infamous Birmingham church bombing of 1963 that killed four young girls. – New York Times