The 15-month old has suffered a broken spine and ribs, concussion and punctured lung 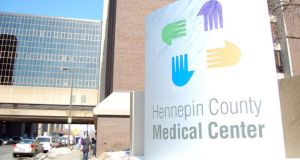 A 15-month-old American baby survived an 11-storey fall from a tower block and is recovering in Hennepin County Medical Centre.

An American baby who survived an 11-storey fall from a tower block has been dubbed “the miracle baby” and is recovering in hospital.

Fifteen-month-old Musa Dayib suffered a broken spine and ribs as well as a concussion and a punctured lung.

His relatives believe he slipped through the railing of his family’s apartment balcony in Minneapolis on Sunday evening.

Dr Tina Slusher of the hospital’s paediatric intensive care unit told the Star Tribune that Musa landed on a small patch of mulch.

“If you and I fell that far, we would be dead,” she Slusher said. “He’s a kid. So they tend to be more flexible and pliable than you and I would be. Having said that, it’s a real gift from God that he made it because this is a huge fall.”

A group of Somali-Americans who live in the area quickly gathered as emergency workers treated the boy and an ambulance took him to the hospital, said community activist Abdirizak Bihi.

“When people found out he survived, no one could believe it,” he said.

Mr Bihi said the child’s mother was running errands while his father watched the boy and his three-year-old sister.

The father had gone briefly into another room when the boy fell, Mr Bihi said.

In a statement released by hospital officials, the parents said they were thankful for the “continued prayers for Musa and his family at this time”.

The owner of the apartment building met community members to discuss measures to keep children safe.

At a tenants’ meeting on Tuesday night, Riverside Plaza owner George Sherman said maintenance staff will close off balcony doors for any tenant who asks, according to Minnesota Public Radio News.

Mr Sherman said he is also checking to see what sort of permanent childproof locks are allowed under the fire code.

The balcony meets requirements under city building codes. The vertical rods under the railing are 5.5 inches apart, a larger space than today’s building code requires, according to Minneapolis city building official Patrick Higgins.