Michelle Obama turns out to be Hillary Clinton’s trump card 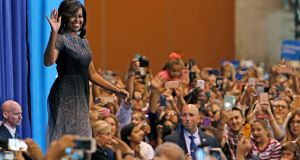 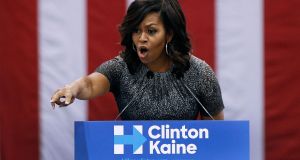 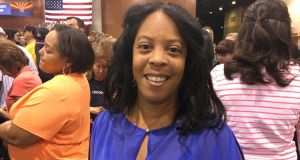 Karla Burks, an admirer of Michelle Obama, at the US first lady’s rally in Phoenix, Arizona. “She makes you feel like she’s one of you,” she said of Mrs Obama. Photograph: Ruadhán Mac Cormaic 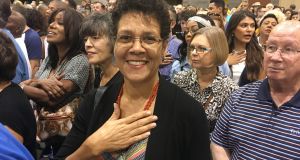 Jan Voelkel at Michelle Obama’s rally in Phoenix, Arizona. “She has behaved with such grace and such dignity while in the White House,” she said. Photograph: Ruadhán Mac Cormaic 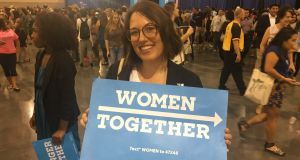 Morgan Tucker at Michelle Obama’s rally in Phoenix, Arizona. “She is essential in linking the Bernie [Sanders] people to the Hillary campaign, and they need that.” Photograph: Ruadhán Mac Cormaic

When Barack Obama needed star power to light up his campaign rallies in 2008, he turned to Bruce Springsteen. Eight years on, Hillary Clinton has found a more unlikely rock star to fire up the crowds and broaden her appeal.

On Thursday, Michelle Obama drew thousands of exuberant supporters to the convention centre in Phoenix, Arizona, a traditionally Republican state where a narrowing gap in the polls has convinced the Clinton campaign to push for a prize only a single Democrat – Bill Clinton in 1996 – has claimed in the past half-century. That the first lady was dispatched to Phoenix was seen as proof that the Clinton camp believes a famous victory is within reach.

She may have a reputation as a reluctant campaigner, but today Michelle Obama is widely regarded as the most effective advocate on the campaign trail. Her appeal is clear. She is more popular than her husband and either of the two main presidential candidates. About two-thirds of Americans have for the past eight years consistently viewed her favourably, according to polling data. Her approach to her role has won plaudits and her initiatives for military families and against child obesity have seen her stock soar.

Now she serves as a vital conduit between Clinton and white, female voters in swing-state suburbs as well as minority voters in cities across the country. “With her numbers, she can go anywhere,” said David Plouffe, a key architect of Obama’s 2008 campaign, during the summer.

Here in Phoenix, local supporters queued for up to six hours in scorching heat to ensure they could cheer Michelle on in person. Inside, they sang and chanted all morning until the first glimpse of the first lady sent a deafening roar through the hall.

“She makes you feel like she’s one of you,” said Karla Burks, a local travel company employee who came along because she wanted to say “thank you” to Mrs Obama after the past eight years. “I’ve been wanting to see the first lady for quite some time. I wanted to be here for this important part of history.”

As Burks pointed out, Mrs Obama has been a role model for black women and children across the US. But polls show her appeal stretches across demographic boundaries. “She is essential in linking the Bernie people to the Hillary campaign, and they need that,” said Morgan Tucker (34), a political campaigner who admitted she voted for Hillary’s opponent, Bernie Sanders, in the Democratic primary. But Tucker had no doubt about the need to row in behind Clinton now. “I think anyone who is still holding a grudge is quite frankly ridiculous, because the risk is so huge now.”

In an impassioned 30-minute speech that extolled Clinton’s strengths and castigated “her opponent” – in her speeches Mrs Obama has pointedly avoided referring to Donald Trump by name – the first lady underlined the qualities that, in the eyes of Democratic strategists, make her such an electoral asset. She avoided going into specific policy issues, instead focusing on the two candidates’ characters in a way that enabled her to remain above the nitty-gritty of party politics.

Setting out an optimistic vision that contrasted with the tenor of the campaign itself, she framed the decision facing voters and one between hope and despair. “You see, in this race, we have a candidate whose vision for our country is completely and utterly lacking in hope. A candidate who tells us that our country is desperate and weak, that our communities are in chaos; that our fellow citizens are a threat. A candidate who calls on us to turn against each other, to build walls, to be afraid.”

Fortunately, Mrs Obama went on, there was another candidate – “our friend Hillary” – who offered a fundamentally different vision of America. “Hillary knows that our country is powerful and vibrant and strong. Big enough to have a place for all of us, and that each of us is a precious part of the great American story.

“Hillary believes in equality; inclusion; liberty and justice for all. That each of us should have the chance to fulfil our potential and build our shared future. That is Hillary’s vision for America.”

Michelle Obama’s emergence as Clinton’s most ardent champion would have seemed unlikely not too long ago. The relationship between the Obamas and the Clintons reached a nadir during the bitter 2008 primary campaign, and there has never been a particularly close bond between them. But faced with a common enemy – and one determined to unwind Obama’s legacy – the couples have made every effort to present a united front.

The president and first lady have been campaigning aggressively for Clinton in recent weeks; when Michelle was speaking in Phoenix, Barack was on stage at a rally in Miami. The effect of Michelle’s interventions on women voters in particular has not been lost on the opposition. This week, a super-Pac – or political action committee – backing Trump bought TV airtime in parts of Florida for an ad aimed at driving a wedge between Hillary and Michelle by replaying comments made by Michelle in 2007 which some claimed were a reference to infidelity by Bill Clinton (the Obamas denied this at the time).

In Phoenix, many in the crowd happily admitted they were drawn primarily to Michelle herself. “She has behaved with such grace and such dignity while in the White House, ” said Jan Voelkel, an independent who said she would vote for Clinton without hesitation this year. “[Michelle] is intelligent, she is caring, she is gracious, and I think that really resonates with people. Especially now, when once again race relations have become strained in this country.”

For Morgan Tucker, the Sanders fan, the relationship with Hillary was “more respect and admiration than passion and enthusiasm.” With Michelle, she said as the hall was emptying, it was more clear-cut. “She’s always incredible. She fills my heart. And I hope we’ll see her again four years down the road.”