Michele Bachmann: former presidential candidate to bow out of Congress

Retirement next year unrelated to recent probes by FBI and ethics body, she says 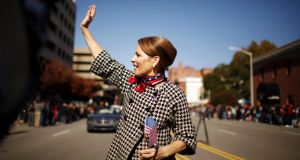 Michele Bachmann, who made an ill-fated run for the Republican presidential nomination in 2012, announced yesterday she would not seek a fifth term in Congress next year. Photograph: Travis Dove/The New York Times

Former Republican presidential candidate and Tea Party star Michele Bachmann has said that she will not seek a fifth term in Congress next year, ending one of the US’s most colourful political careers.

The Minnesota congresswoman made the announcement in an eight-minute video on her website, six months after her narrow re-election to the House of Representatives.

Bachmann’s political career highlight was her victory in an Iowa straw poll in 2011, the first by a female Republican, in the race for the party’s presidential ticket, though support for her bid later petered out.

She said her retirement had nothing to do with the investigations by the Office of Congressional Ethics and the FBI into her presidential campaign and the finances of her political action committee.

Anti-abortionist
Bachmann is best known as an anti-abortionist campaigner, supporter of the Tea Party’s ultra conservative values and her regular misstatements.

Her gaffes, including her false statements that the vaccine against the human papilloma virus was linked to “mental retardation” and that Obama was a “$1.4 billion-a-year presidency of perks and excesses”, pushed the erstwhile Republican presidential hopeful into the national spotlight.

She embraced the Tea Party movement as an emerging political force in the 2010 mid-term elections, pitching herself as the voice of conservatives and later as leader of the Tea Party Caucus in the House.

“My decision was not in any way influenced by any concerns about my being re-elected to Congress,” she said. “If I ran I would again defeat the individual who I defeated last year.”

Her retirement comes as a poll published by the Washington Post and ABC News last week showed that strong support for the Tea Party fell to just 10 per cent, the lowest recorded level in two years.

The controversy over the targeting of conservative Tea Party groups by the US tax authorities, the Internal Revenue Service, may have generated support for the movement in recent weeks.

The level of strong support in national polls was misleading, said Theda Skocpol, a professor of government and sociology at Harvard University, as the Tea Party was “an intense minority movement at the edge of the Republican Party”. The conservative movement, which advocates reducing federal spending and small government, still had “a great deal of leverage over Republican candidates and office-holders,” she said.

Some 66 Republicans in the House, out of 233 in all, are members of the Tea Party Caucus, while less conservative Republicans regularly engage in Tea Party-type rhetoric to resist challenges in their home constituencies.

The movement’s grassroots comprise older, white, conservative-minded voters who make up about half of Republican supporters.

“That is a lot of people but not only that, those voters are paying a lot of attention to American politics,” said Prof Skocpol, noting how they were among the most reliable of voters in elections.

“They are still there and the Republicans that they elected in very large numbers in 2010 are still there, and that is why politics in Washington DC is still very much in gridlock.”