Michael Bloomberg reported to be preparing US presidential bid 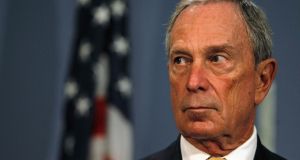 Michael Bloomberg, the billionaire former mayor of New York City, has told his aides to draw up plans for an independent campaign for the US presidency, the New York Times reported on Saturday.

Bloomberg has advised friends and associates that he would be willing to spend at least $1 billion of his own money on a campaign for the 2016 election, the Times said, citing sources briefed on the former mayor’s thinking.