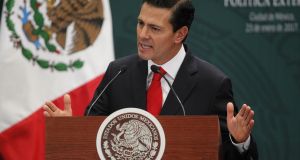 Mexican President Enrique Pena Nieto said on Thursday he had scrapped plans to meet Donald Trump next week after the US president tweeted Mexico should cancel the meeting if it was not prepared to pay for his proposed border wall.

“This morning we informed the White House that I will not attend the work meeting planned for next Tuesday with the POTUS,” Pena Nieto said on Twitter, referring to Trump.

1 Coronavirus: Surge of cases hits nursing homes as clusters jump to 38
2 Ireland has strategy to ‘break the chains’ of coronavirus - WHO’s Mike Ryan
3 Irish woman in Sweden: No lockdown, little distancing, people still shaking hands
4 Coronavirus: Situation in Ireland ‘misrepresented’ because of limited testing
5 Cheltenham faces criticism after racegoers suffer Covid-19 symptoms
6 We need to cancel the Leaving Cert and give students predicted grades
7 Stephen Collins: The cliche Ireland has 'a third world' health service was never remotely true
8 Are holidays booked for July and August going to happen?
9 Tiger King: You wait years for just one animal-collecting weirdo, then half a dozen arrive at once
10 ‘For the first time in years it is a renter’s market’
11 UK makes another coronavirus U-turn but doubts over strategy linger
12 Spain now has most coronavirus cases in Europe but death rate slows
13 We stood in the car park of the nursing home while my father-in-law breathed his last
14 Google data shows fall in crowds in Ireland as social distancing measures kick in
15 Fish and chips: How to cook them just like the chipper does
16 Why the State should give us all gift vouchers, let's call them Paschalbonds
17 What is Houseparty, the app everyone’s talking about – and not in a good way?
18 Central Bank warns of €22bn hole in public finances from coronavirus crisis
19 Secondary students want State exams replaced with predicted grades
20 Covid-19: Westport braces for tough times ahead
21 Private hospital consultants urged not to sign up to working in public system
22 Drogheda shop assailant arrested by gardaí at Covid-19 checkpoint
23 Goodbye leprechaun economics, hello another grim milestone
24 Expect lockdown restrictions until September, says Dalata hotels chief
25 Impact of Covid-19 on Travelling people: ‘Worst that ever came’
26 Coronavirus: Warning over rate of growth as 13 more die in Republic
27 ‘It’s Sinn Féin against the rest’: NI Executive in conflict over coronavirus
28 An Post sees big jump in people opening new current accounts
29 Coronavirus: Access to Dublin beauty spots restricted
30 Some protection equipment from China ‘not ideal’, HSE says
31 Klaus Regling: Eurobonds are not the solution to the cost of coronavirus
32 No signs of lock-down fatigue in Ireland ... yet
33 Coronavirus: European solidarity sidelined as French interests take priority
34 Think you’re bad at video-conferencing? Boris Johnson is worse
35 Miriam Lord: You cannot cocoon democracy – or can you?
36 Sport will be last duck in the row in return to normality after coronavirus
37 Coronavirus: Gangs take advantage to import large amounts of drugs
38 Andrew Conway diary: In search of a competitive edge
39 Lockdown, death metal and freshly baked bread on the family WhatsApp
40 Economy could have relatively rapid recovery from Covid-19
Real news has value SUBSCRIBE