Maureen Dowd: How Obama has passed his baton to Hillary Clinton

On his way up Barack Obama criticised Hillary Clinton. Now he must praise her 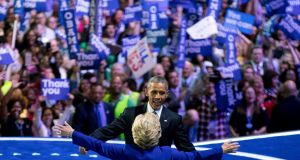 It wasn’t easy for Barack Obama, a skinny newcomer to national politics with an exotic name and scant resume, to overthrow the voracious Clinton machine. The 45-year-old had to turn himself into a dream catcher. He had to become an avatar of idealism and persuade Americans he could take us to a political Arden beyond lies and vanishing records and money grabs and Marc Rich and Monica and Motel 1600.

“We need a leader who’s going to touch our souls,” Michelle Obama told a South Carolina rally in 2007. “Who’s going to make us feel differently about one another.” Obama was going to lift Washington to a higher plateau – not one where the president consulted a pollster to see where he should vacation or if he should tell the truth about his intern/mistress. The young senator from Chicago was going to prove that the White House could be a gleaming citadel of integrity and ethics and exemplary family life.

Watching Bill Clinton and Newt Gingrich go at it, Obama once wrote, “I sometimes felt as if I were watching the psychodrama of the baby boom generation – a tale rooted in old grudges and revenge plots hatched on a handful of college campuses long ago – played out on the national stage.”

He presented himself as the ticket to the future. He made us feel good about ourselves, that we could be better, do better. Making the case against Hillary, he said America deserved more than triangulating and poll-driven positions and “the same old Washington textbook campaign”, more than a candidate answering questions whatever way she thought would be popular and “trying to sound or vote like Republicans, when it comes to national security issues”.

What about principles, he asked, what about a higher purpose? Obama was not surrounded by the mercenary likes of David Brock and Dick Morris but true believers like David Axelrod. The Clintons, infuriated by the raft of Democrats who deserted them during the 2008 campaign, sneered at Obama’s hope and change message. Hillary protested, “We don’t need to be raising the false hopes of our country.” Bill groused, “This whole thing is the biggest fairy tale I’ve ever seen.”

The same Obama who sparked a revolution has now made it his mission to preserve the establishment for Hillary. He told Rutgers’s school paper in May that Sanders supporters needed to stop searching for silver bullets and recognise “we have to make incremental changes where we can, and every once in a while you’ll get a breakthrough and make the kind of big changes that are necessary”.

Yes we can – incrementally! The president passed the baton to Hillary, as he puts it, more than three years ago, feeling she’s the safest bet to protect his legacy. As Politico’s Glenn Thrush reports, Obama wants to create what he calls “a 16-year era of progressive rule” and refocus American politics as the “Reagan of the left”, as one of his advisers put it.

Showing his icy pragmatism, the president passed over his loyal vice-president because he thought Joe Biden would not be as strong a candidate, given his tendency for gab and gaffes. (That was before Donald Trump made Biden seem exquisitely bridled.) When Biden didn’t take the hint, Obama sent his former strategist David Plouffe to break the bad news.

Besides Biden, Obama threw another loyal former lieutenant, Chicago mayor Rahm Emanuel, under the bus. In the DNC video introducing Obama at the convention, the president was built up as a hero on healthcare. It said Emanuel went to the president and said, “You’re going to have to pull the Bill, because if you push this legislation, you will lose in 2012.”

Emanuel, hosting a party at the convention that night, was upset. It was his job to warn the president of the political consequences and, after Obama decided, it was Emanuel and Nancy Pelosi who had to arm-twist the Bill through with no Republican votes.

Before he died, Beau Biden told his father he wanted him to run partly because he didn’t want the White House to fall back into the miasma of Clinton family values. The president made his vote-for- Hillary-or-face-doom convention speech only 22 days after his FBI director painted Hillary as reckless and untruthful. He argued there is no choice but to support Hillary against a “self-declared saviour” like Trump, perhaps forgetting Obama was once hailed as such a messiah Oprah introduced him in 2007 as “the one”.

In the end, Obama didn’t overthrow the Clinton machine. He enabled it. It turns out who we choose is not about our souls. It’s just politics, man. – (New York Times)