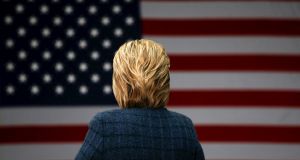 Democratic US presidential candidate Hillary Clinton: Bernie Sanders’s populist surge has led some top Democrats to wonder if Barack Obama will have to step in and endorse her campaign. Photograph: Adrees Latif/Reuters

Hillary Clinton first grabbed the national spotlight 47 years ago as an idealistic young feminist, chiding the paternalistic establishment in her Wellesley commencement speech. So it’s passing strange to watch her here, getting rebuffed by young women who believe that she lacks idealism, that she overplays her feminist hand and that she is the paternalistic establishment. Bernie Sanders may be a dead ringer for Larry David, but Hillary is running the “Curb Your Enthusiasm” campaign. She can’t fire up young voters by dwelling on what can’t be done in Washington and by explaining that she’s more prose than poetry.

She’s travelling around New Hampshire with a former president who could easily layer in some poetry, and a handful of specific snappy plans for the future, to her thicket of substance and stack of White Papers. But somehow, Hill and Bill campaign side by side without achieving synergy.

Is it that he’s as tired as he looks or does she feel too competitive with him to ask for that kind of help? As one Hillary booster in Hollywood marvelled: “There’s no chance her husband doesn’t understand the problem. The look on his face during her speeches evokes a retired major league All Star watching his son strike out in a Little League game. This is so fixable.”

Hillary is like a veteran actor who doesn’t audition well. Bill could tell her not to shout her way through rallies, that it doesn’t convey passion but just seems forced, adding to her authenticity problem. Her allies think mentioning her shouting is sexist, and sexism does swirl around Hillary, but her campaign cries sexism too often. In 2008, Barack Obama used race sparingly.

Even after all this time watching Bill and Barry, she still has not learned the art of seduction on stage. She’s surrounded by former Obama and Bill Clinton strategists, but they are not helping her achieve “the goose bump experience”, as Lily Tomlin called it. Hillary has ceded the inspirational lane to the slick Marco Rubio, who’s more like the new John Edwards than the new Obama.

She could, as one talented political speechwriter riffed, say something like this: “We’re a stronger country when more people have higher incomes; when women get paid the same as men; when we draw on the diverse talents of immigrants; when we show the world that America is a place that embraces all religions, that offers refuge to the persecuted and the terrorised. When a few old rich white men are the only ones who succeed, that’s not just unfair, it’s untenable.”

Hillary’s most poignant moment came during the CNN town hall on Wednesday night when she said that, as a young woman, she had never expected to run for president herself, given that her husband was “a natural”. It was her misfortune in 2008 to run into another natural. She was not “likable enough” that year.

But it was at least fathomable. She was running against the Tulip Craze Barack Obama. Now she’s running against a grumpy gramps, a stooped socialist with a narrow message, brusque manner and shaky grasp of world affairs. But the Clintons are still levelling the same charges, that her opponent’s stances are fairy tales and that his idealism masks tough tactics.

And she’s still not likable enough for the young women who were supposed to carry her forward as a Joan of Arc. According to an NBC News/Wall Street Journal/Marist poll, Sanders won among young men and women in Iowa by 70 points. And in New Hampshire, going into the weekend, polls showed him leading with women, racking up yawning margins with women under 45 and with both sexes under 30.

Lyndon Johnson said that the two things that make politicians more stupid than anything else are sex and envy. With Hillary, there are three things: sex, money and the need for secrecy. She was in on sliming her husband’s ex-girlfriends who told the truth about liaisons. She has long been driven by a fear of being “dead broke” as she put it, and a conviction that she deserved the life and perks she would have had if she had gone into the private sector. That led her to do her suspiciously lucrative commodity trades while Bill was Arkansas attorney general and to make Wall Street speeches on the cusp of her 2016 campaign, even though she and Bill had already made more than $139 million (€125 million) between 2007 and 2014.

The Nixonian obsession with secrecy by the woman who was once an idealistic lawyer on the Watergate committee staff – on Whitewater, healthcare and her state department emails – caused her to unnecessarily damage herself and leave Democrats perennially spooked.

While she was giving three speeches to Goldman Sachs for $675,000, her party was changing. As the economy slowly healed, Democrats were seething with anger over the big banks that never got punished for wrecking the economy and the reckless billionaires who are still living large. A tone-deaf Hillary was there sucking at the teat, and that rubs people the wrong way.

Sanders noted in Thursday’s debate that Hillary’s “super PAC” had raised $15 million in the last quarter from Wall Street. The Wall Street Journal calculates that since the Clintons first entered national politics in the early 1990s, Wall Street has given more than $100 million to their campaigns, foundation and personal finances.

As with the Chappaqua email server, Hillary is not sorry she did it. She’s only sorry people are making a fuss about it. Typical of the Clintons, she tried to drag in others to excuse her own ethically lax behaviour, noting that “every secretary of state that I know has done that”. After the Monica scandal broke, Clinton aides cited Thomas Jefferson, FDR and JFK to justify Bill’s Oval Office cavorting.

But the other secretaries of state were not running for office, Cooper pointed out. “To be honest I wasn’t – I wasn’t committed to running,” Hillary said. It’s that sort of disingenuous answer that has spurred so many Democrats to turn to the straight-shooting, Wall Street-bashing Sanders. When Hillary accused Sanders during the debate of doing an “artful smear” on her, charging him with insinuating that she engaged in pay-for-play with Wall Street, drug companies and other special interests, some Republicans predicted that the moment would go down as a Gary Hart-style challenge that would come back to haunt her.

They said that surely Matt Rhoades, the Hillary opposition-research expert at political action committee America Rising, must already be plotting ads slamming the disturbing cat’s cradle of foreign money that came into the Clinton Foundation while Hillary was at state, and the unseemly tentacles of Teneo, the global firm run by Bill Clinton’s former body man, Doug Band, where Huma Abedin, Hillary’s closest aide, worked while she was at state.

Sanders’s populist surge – he raised $20 million last month, $5 million more than Hillary – has led some top Democrats to wonder if Obama will have to step in and endorse her. Wouldn’t that be rich? The Wellesley idealist-turned-realist needs the Chicago idealist-turned-realist who beat her last time to save her from the Vermont idealist clinging to a simple reality: Wall Street fleeced America and none of the big shots got punished. – (New York Times)