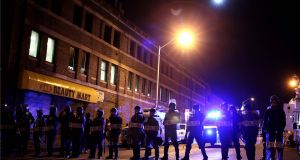 Police in riot gear stand on on the street after Baltimore authorities released a report on the death of Freddie Gray in May. Kevin McLeod was shot in Reistertown, an area where protests broke out following Gray’s death. Photograph: Patrick Smith/Getty Images

A man was shot dead after pointing his finger as if it was a gun at a police officer who was chasing him for trying to obtain cough syrup with a fake prescription, police in Maryland said on Thursday.

Baltimore County police said 19-year-old Keith McLeod was shot three times in Reisterstown after “reaching around to the small of his back and abruptly whipping his hand around and pointing it toward the officer, as if with a weapon”.

Police said in a statement that the shooting on Wednesday was recorded on surveillance footage from a nearby business, which shows that after falling to the ground he “refuses to comply and keeps reaching into his waistband, as if for a weapon”.

McLeod was being pursued for attempting to use a fake prescription at a pharmacy, according to police, who said the officer responded to a call from a pharmacist and chased the man across the street. Witnesses reported the officer told the man to stop, police said.

“Narcotics detectives confirm that the suspect tried to obtain promethazine plus codeine at the Nature Care pharmacy,” Baltimore County police said in a statement. “This is a narcotic cough syrup, often combined with alcohol to produce a ‘high’.”

On Wednesday police had said “a confrontation occurred” between the two men and that officers had “not yet recovered a weapon” from the scene. Thursday’s statement said: “A weapon was not found.”

Reistertown is a suburb of Baltimore about 25 miles northwest of the city, where protests and riots broke out earlier this year following the death of Freddie Gray (25) in police custody. Gray suffered a broken neck and six officers have been charged over his death.

McLeod was transported to Northwest hospital, where he was declared dead. Police released his name on Friday.

The officer who shot him has been placed on administrative leave, according to police, who said the shooting would be investigated by his own department and reviewed by the Baltimore County district attorney. Guardian service