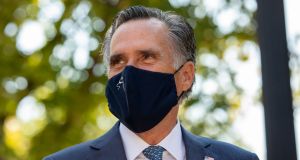 Utah senator Mitt Romney. ‘Though a moderate on many issues he is a proud Republican.’ Photograph: Amanda Andrade-Rhoades/Bloomberg

He was always an unlikely hero for the left, but this week former Republican presidential candidate Mitt Romney offered a reminder that aversion towards Donald Trump goes only so far when it comes to big picture issues for Republicans.

Romney, who unsuccessfully ran for president against Barack Obama in 2012, having run sought his party’s nomination in 2008, was elected to represent Utah in the Senate in 2018.

A stalwart of the Republican Party, he ruffled feathers even before he took his seat in the Senate last year, writing a hard-hitting opinion piece in the Washington Post about his opposition to Donald Trump. “When he won the election, I hoped he would rise to the occasion,” he wrote, but “the president has not risen to the mantle of the office”.

By throwing down the gauntlet in this way, Romney seemed to be positioning himself as a successor to figures such as John McCain and Jeff Flake – Republicans in the Senate who had stood up to Trump in his first two years in office.

In many ways, Romney lived up to this billing.

During Trump’s impeachment trial earlier this year, Romney was the only Senate Republican to vote to convict the president on one article of impeachment. His vote elicited the wrath of not just the president but his family. Donald Trump junior called for him to be expelled from the Republican Party.

“He’s now officially a member of the Resistance,” he tweeted. During the summer Romney was one of the only Republican elected representatives to participate in the Black Lives Matter protests in Washington DC, protesting over the death of African-American man George Floyd while in the custody of white police officers.

But any expectation that he could similarly break with his party this week following the death of supreme court Justice Ruth Bader Ginsburg proved unfounded.

On Tuesday, Romney confirmed that he would consider Trump’s nominee for the court this year, despite the vacancy arising just before the presidential election – the very reason why Senate majority leader Mitch McConnell blocked Barack Obama’s nominee, Merrick Garland, four years ago.

His commitment to consider a Republican nominee, who will be named by Trump on Saturday, means that McConnell is likely to have the majority of 51 needed to secure confirmation.

Romney’s decision, though disappointing for Democrats, should not be surprising. As a former presidential candidate for his party, his conservative credentials are impeccable. Though a moderate on many issues – he served as Republican governor of Massachusetts, a Democrat-leaning state – he is a proud Republican. His membership of the Church of Latter Day Saints made him a popular candidate among the Mormon community when he contested the Senate seat in Utah in 2018.

Critics of Romney also point out that he briefly considered a post in Trump’s cabinet after the businessman’s unlikely victory in the 2016 election, suggesting that he is more fickle than he projects.

Romney’s decision to back his Republican colleagues in the Senate this week over the supreme court vacancy is a reminder of the primacy of conservative politics and belief systems to many Americans, even those who dislike Donald Trump.

This once-in-a-generation chance to secure a cast-iron conservative majority on the supreme court, is simply something most elected Republicans do not want to give up, whatever the hypocrisy of the move given the party’s decision not to consider Obama’s nominee in 2016.

To a large extent, Romney reflects the politics of his constituents. Though polls in 2016 showed that many Mormons disliked Donald Trump, ultimately Utah backed the Republican candidate. The state is virtually guaranteed to stay red in this year’s presidential election, though it will be interesting to see if Romney receives any pushback from voters in the Salt Lake City area, which has become increasingly liberal in recent years.