Man with ‘Republicans against Trump’ sign says he was beaten

It shows ‘what he is doing to his crowds’, says man after security bundled Trump off stage

Austyn Crites describes how Donald Trump supporters turned on him at a rally in Reno, Nevado for holding up a “Republicans against Trump” sign. His protest saw Trump rushed off the stage by Secret Service agents. 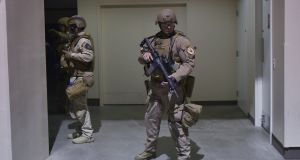 Police outside a bathroom where a protestor was held after Donald Trump was escorted off stage during a rally in Nevada when someone mistakenly thought the protester had a gun. Photograph: Mandel Ngan/AFP/Getty Images

The man whose protest saw Donald Trump rushed off the stage by secret service agents has said the Republican nominee’s supporters turned on him when he held up a sign reading: “Republicans against Trump”.

The man, who identified himself as Austyn Crites (33) from Reno, said he was holding the sign at a rally when Trump supporters wrestled him to the ground.

He said he was kicked, punched and choked, and feared for his life when the crowd turned on him at the gathering in Reno, Nevada.

Mr Crites cited the Republican candidate’s treatment of Mexicans, Muslims and women as the reason he decided to protest against Mr Trump, who he described as “a textbook version of a dictator and a fascist”.

There were panicked scenes at the Trump rally, apparently prompted by shouts from at least one person in the crowd that the protester had a gun.

Hundreds of people fled to the back of the auditorium in panic as Mr Trump was hurriedly rushed from the stage by his security detail.

The US Secret Service later said in a statement that no weapon was found on the subject detained at the rally, who had been released.

A bruised and shocked-looking Mr Crites was outside the auditorium. He said he was shaken and had pain in the back, but was otherwise uninjured.

Mr Crites, who said he was an inventor who works with high-altitude balloons, said the incident occurred after he walked towards the front of the stage to protest silently against Mr Trump. 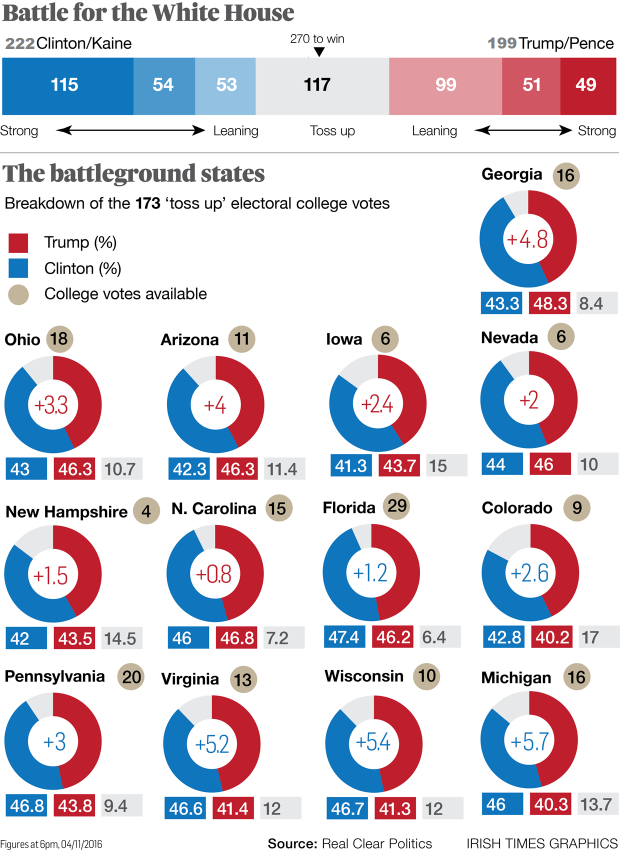 When he was near the front of the crowd, he said he silently held aloft his sign.

“I had a sign that said ‘Republicans against Trump’. It is a sign that you can just print off online.”

Initially, there was the expected reaction of people around him booing, he said. “And then all of a sudden people next to me are starting to get violent; they’re grabbing at my arm, trying to rip the sign out of my hand,” he said.

He said he could not be sure but “it looked like” Mr Trump was pointing at him, and may have been “instigating something”. Either way, the crowd piled on him, he said, kicking, punching, holding him on the ground and grabbing his testicles.

He said he was a wrestler in his youth and used his training to turn his head to the side to maintain an airway open as he was being choked by one man who had him in a headlock. “But there were people wrenching on my neck; they could have strangled me to death,” he added.

Mr Crites said when he was on the ground he heard someone yell “something about a gun” and he kept telling those on top of him that he had merely been holding a sign.

He was unaware then that Mr Trump had been ushered from the stage amid the mayhem.

For his part, Mr Crites said he felt relieved when police arrived and placed him in handcuffs, but said officers had to fend off Trump supporters who continued to attack him. “As I was taken from the room, people are just looking at me like I’m a demon,” he said.

He said he was taken to the back of the auditorium, searched, subjected to a background check and then swiftly released.

Several Trump supporters who witnessed the incident said they saw a man wrestled to the ground and, after he was on the ground, heard shouts that he had a weapon, prompting panic.

One of those witnesses, a Trump supporter, said he had seen the protester holding a “Republicans against Trump” sign, and assumed it had been misidentified as a weapon.

Although he described himself as a Republican and fiscal conservative, Mr Crites said he had canvassed “for a few hours” with the Clinton campaign in Nevada because he wanted to do all he could to prevent a Trump presidency.

He said he was not fully supportive of Ms Clinton but believed she was the only candidate who could stop Mr Trump from reaching the White House.

Mr Crites said he had no formal connection to the Clinton campaign and decided to attend the rally on his own volition.

“Evan McMullin is someone I also support,” he said of the independent conservative standing for president in many states, and added that he backed Mr Trump’s Republican opponents during the primaries. “John Kasich, for example, was a great candidate.”

While he was surprised at what occurred at the rally, Mr Crites he said he did not blame the crowd for his treatment. “I like these people,” he said. “These are my fellow Americans. I love these people. I understand that they came here because they’re patriotic, they want to do good for their country.”

He added: “The people who attacked me – I’m not blaming them. I’m blaming Donald Trump’s hate rhetoric.”

“My heart still aches for what this nation could potentially do by electing him,” he added. “That hurts me much more than any of this violence.”

“The fact that I got beat up today, that’s just showing what he’s doing to his crowds. But I just want people to understand I’m going to be okay, but now what’s more important is if the country going to be okay? So do your part and vote.”