Man gets 90 years for attack on Irish student in Chicago 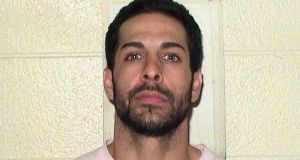 Heriberto Viramontes has been sentenced to 90 years in prison for brutal assault in April 2010. Photograph: Reuters

A man who brutally attacked a young Irish student and her friend on a street in Chicago has been sentenced to 90 years in prison. Heriberto Viramontes, convicted of the April 2010 attempted murder of Natasha McShane and Stacy Jurich, must serve 85 per cent of the sentence because of the particularly terrible nature of the crime, Judge Jorge Alonso ruled.

It effectively means life for the 35-year-old Viramontes. Judge Alonso said the sentence was based on the “brutality and cold blooded heartlessness displayed on the night.” He received 25 years for each of the attempted murders of McShane and Jurich and further 20 year sentences for aggravated armed robbery, all consecutive.

Ahead of the sentencing, Natasha’s mother Sheila took the stand to deliver a victim impact statement, describing the continuing pain, anguish and emotional turmoil the once highly-gifted student and her family are going through. All because of the “brutal display of humanity” that night in 2010.

The attack happened early in the morning of April 23, 2010, as the young women returned home from a night out in the Bucktown neighbourhood on Chicago’s northside. McShane, then 23, a UCD graduate on an education exchange programme at the University of Illinois, was celebrating after securing an internship allowing her to remain in the city.

But as they walked to Jurich’s apartment, passing beneath an underpass, Viramontes came from behind, striking each woman once across the back of the head, then stealing their purses.

Unconscious The trial last October heard McShane was hit with such force she fell hard on the ground, unconscious. Jurich remained conscious as police arrived, then blacked out.

Viramontes had been on the prowl for victims, telling his driver, co-accused, and later key prosecution witness, Marcy Cruz: “Look at all those rich white bitches.”

As the two women were rushed to hospital, Viramontes and Cruz tried to use Jurich’s credit card at two filling stations. They were caught on camera. A baseball bat was recovered from the back of the van Viramontes and Cruz were travelling in the night of the attack.

Both were arrested a week after the attack. Cruz pleaded guilty to two charges of attempted murder and received a 22-year sentence.

McShane spent weeks in a medically induced coma as doctors worked to repair the severe damage caused to her brain, particularly those parts key to her motor and verbal skills.

She was returned home in July 2010 and continued to receive treatment in two Belfast hospitals. But the young student student suffered setbacks, an infection and seizures.